Show and tell with Nyarlathotep 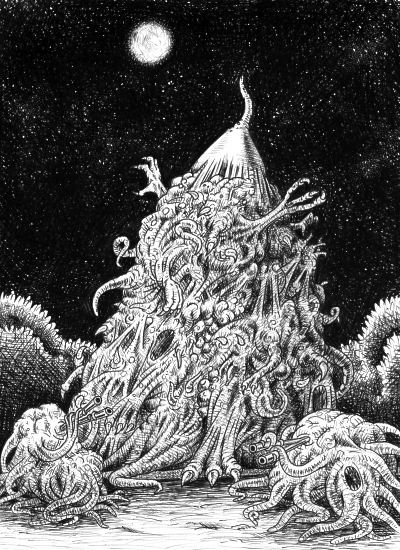 There is a storytelling principle of “show, don’t tell.” So one might say:

instead of “I was driving through the desert at night.” It paints a picture of a scene, drawing the listener in by activating the imagination. Similarly, the opening minutes of Fritz Lang’s M doesn’t tell us about the tension and fear due to a serial killer on the loose. The exposition embeds a wealth of information through editing and design.

This can be challenging in an audio production. In one of the episodes of Escape we heard some really awkward narration from Vincent Price when he described how his fellow adventurers met their demises in the jungle. It would have felt more natural for that information to come through dialogue and sound. I’ve been listening this week to BBC Radio’s The Whisperer in Darkness, which takes an interesting approach to the problem. The story is framed as two people putting together a podcast on the paranormal. That framing gives the characters a natural excuse to narrate events and describe scenes in a way that otherwise would seem very abnormal. The show does acknowledge the issue, as secondary characters ask, “Do people find that annoying? The way you narrate everything?” but it never seems forced or heavy-handed.

It’s something to think about as we plan our radio shows. How can we show our stories through sound? For example, in ESC Sonic Adventure in the Anthropocene, rather than tell about Rachel Carson, the author used sound clips of Carson making her points. If we were to do a show on NYC crime in the 80s, we could weave in clips from news broadcasts, and maybe even add in something from Escape from New York. I suppose it would be analogous to using quotes from primary sources in an academic paper, but with the added benefit of bringing sonic variety to the production.