How not to choose a design assignment

So I told myself: I’ll do a design assignment. I’ll click the random button and do whichever on it gives me. So what do I get? The Spreadsheet Invasion. What the heck should I do with that? And how the heck do I do it? I though of that Mr. X image I used with this week’s assignments, the skyline reflected in his glasses, and how the geometricness of it lended itself to a spreadsheet grid. OK, I could even call that an 80s tie-in. Then it occurred to me to try to animate a sunrise. I built the skyline in Excel by filling cells with black. Once I had that done I realized I could animate it by making new worksheets and copying the previous one in, sort of like flip animation. Now I had a plan and felt like I knew what I was doing. I made the gradation in the sky using the standards colors. Looking back, I should have looked into customizing the color palette. I’ve never done that with Excel. I’m assuming it’s possible, but you never know with Microsoft. I copied my first scene and made a new worksheet and pasted it in. Then I made adjustments – bring the sun up, move the gradation up, repeat. I made 8 worksheets. Now how do I animate it? I thought about doing a screen grab (Cmd+Shift+4) for each worksheet, but then I’d have to try to make them all the same size, and fail and then try to cover for it. I didn’t see an option in Excel to export a worksheet as an image. So I used Quicktime to do a screen recording and flipped through the worksheets. I’d still have to do some cleanup though, so I took another look for an export option. I highlighted all the cells on the screen and copied. Then I went into Photoshop to create a new image. 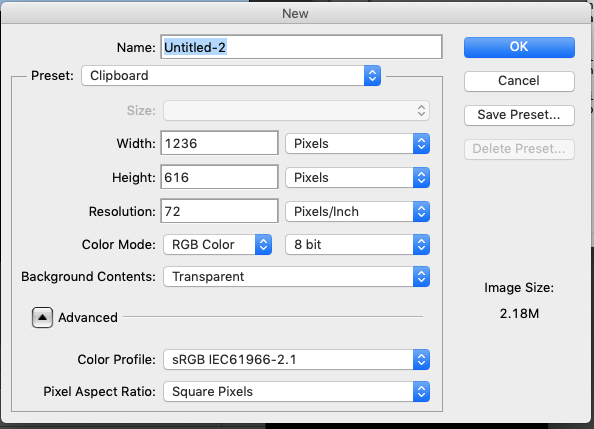 The preset size said Clipboard, so I knew I could just paste my selection as an image. I went back and copied the cells from each worksheet in the same manner, and pasted each selection into my image, which by default made a new layer each time. 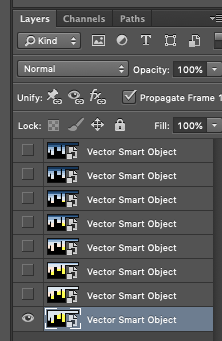 This is what needed to animate it as a GIF.

I created a frame animation on the timeline, and used the Make Frames from Layers option. I set the frame timing to .5 seconds and used the Save for Web option to make it a GIF.

As far as animations go, it’s kinda lame, but then if we wanted something of quality we wouldn’t be using Excel. I think it’s not so much a design challenge as a problem-solving one. And on that level it succeeds. Looking back, there are a lot of things I could have done differently to make it better. I could have made the cells more square, so they look more like pixels. Then I could have had lights in the windows, and had them turn off as the sun rose. I also could have Googled Excel animation and not have to invent a process on the fly, but I suppose that would have been less of a learning experience. What can I do with my newly developed skill? Damned if I know.