News of the World

As we were discussing our ideas for a poliziotteschi party, Jim suggested looking into MSU’s Introduction to Digital Humanities course for some inspiration. The idea is to mine online newspaper archives for what was going on in Italy during the genre’s heyday. My ability to read Italian is close to nil, but I thought I might be able to find some coverage in the New York Times. Unfortunately my academic libraries only have access going back to 1980. But through the magic of the New York Public Library I was able to do some digging. I searched for Italy as a keyword and limited the date range to 1970-1976, and then filtered the results to leave out anything that didn’t have a subject descriptor related to crime. It was a pretty crude approach and I had to manually sift out articles about the New York mafia. There were a lot of articles about kidnappings, one of the subject descriptors, and also a significant cluster of articles about art thefts, which I mostly ignored. I downloaded a significant sampling and looked through a few. I’m not sure that what made the news in NYC paints a good picture of what was going on in Italy, but there were some interesting finds.

Some of these sound like things from the movies, brazen and theatrical. 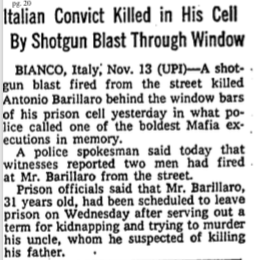 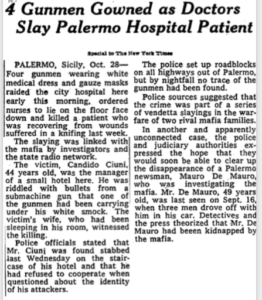 It makes me wonder if those weren’t cases of life imitating art. This fish story, which I used for a Daily Create, also made me wonder:

as in, why did it get printed? Maybe they just had a column inch to fill. I wish there was more context to it. What would police do with five tons of fish? I’d hate to be the guy working in the evidence room. But there were also articles addressing political tensions between fascists and communists and criminals and police. 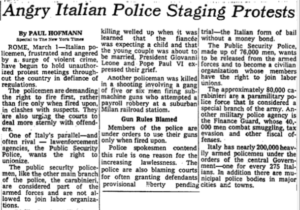 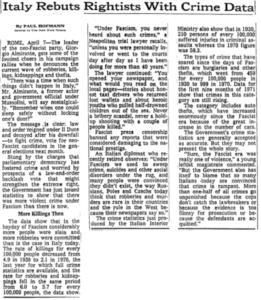 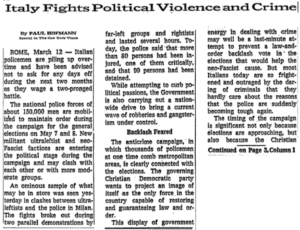 “Under fascism, you never heard about such crimes” not because they didn’t happen, but because they weren’t reported. Crime had decreased by the 70s, but the public impression was that crime was rampant. Alternative facts, perhaps?

This entry was posted in Uncategorized and tagged Poliziotteschi. Bookmark the permalink.