In the late 1960s and 1970s, during the same period that the spaghetti western flourished and the giallo rose to prominence, the Italian cinema developed another popular genre, the crime film 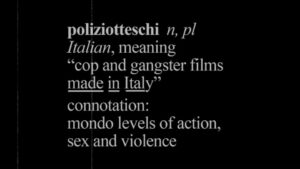 This comes from Bondanella & Pacchioni’s A History of Italian Cinema. Poliziotteschi relate to both genres through the blood and violence. Giallo had more mystery and less realism, and a different kind of psychopathy. The crime film could be seen as a contemporary vision of the spaghetti western though. The Eurocrime documentary covers a lot of the same ground as “The Origin and Historical Matrix of the Italian Crime Film” chapter in the book. 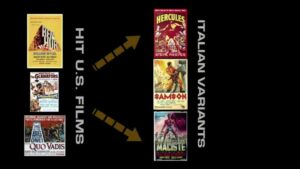 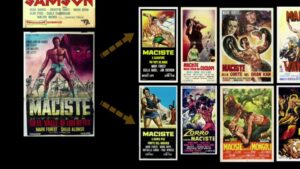 The documentary frames Italian B movies as derivative of American films, and derivative of each other. It cites Dirty Harry, The French Connection, and Death Wish as inspirations. I’m not so sure that it was purely imitative though. The earliest poliziotteschi predated those films. What’s not addressed in the documentary is the work of Giorgio Scerbanenco. (For another giallo connection, see Scerbanenco’s books on Amazon.) Fernando di Leo took his vision of crime and Milan from Scerbanenco’s work – “the first Italian writer to exploit successfully the conventions of the American hard-boiled subgenre and to a harsh critique of the social consequences of the so-called economic boom of the 1950s and early 1960s.” He’s considered the father of Italian noir fiction, bringing the conventions of noir and hard-boiled to stories of modern Milan. It was nice to find his work in the Internet Archive before they shortened the borrowing term from 2 weeks to 1 hour, although it’s unfortunate that so little has been translated into English. 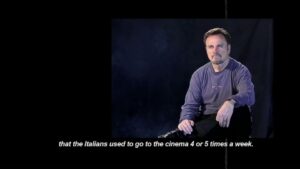 The documentary did give some insight into the film culture of the 70s in Italy. Where we had three or four TV channels in the US, they had two, and the networks had a sort of non-compete agreement with the cinemas so they rarely showed movies. So people went to the theaters frequently, and so they needed a steady stream of product. They had a system for making movies inexpensively. 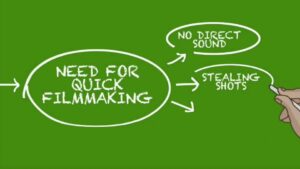 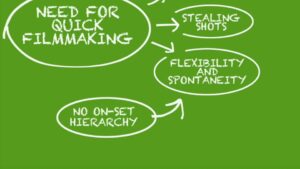 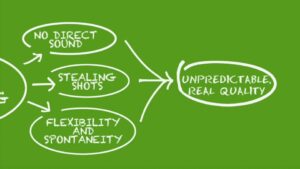 All the sound – dialogue, ambient noises, as well as music – was added in after filming. Not only was there no need for quiet on the set, but if an actor flubbed a line, it could still be useful footage. They could adjust the dialogue to fit. I was particularly fascinated by the concept of stealing shots. Like instead of renting a police car for a chase scene, they could just speed past the police and start a real chase. Or have someone with a gun loaded with blanks start firing on a crowd street corner and film the real reaction rather than set up a shot with extras.

And here’s John Saxon hiding behind a vehicle as the window get shot with real bullets. Who needs special effects when you can do the real thing?

This entry was posted in Uncategorized and tagged Poliziotteschi, Scerbanenco. Bookmark the permalink.