Today’s TDC was Create a Pony Express Postmark. We were supposed to “Design a postmark stamp for the Pony Express of the Modern Age,” but I didn’t read that part until just now. I had the idea to play around with a horse shoe, and then I thought about using the town of Lago, from High Plains Drifter, as the address. So I found a logo through The Noun Project (Horseshoe, By Matthew Davis, US), and a Lago somewhere online, and grabbed the Pony Express and horse from the Wikimedia link in the TDC post. I had to do some copying and pasting and resizing and stuff, and there you go: 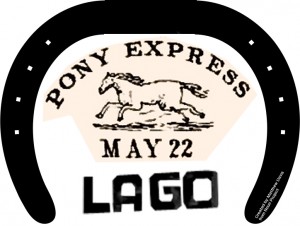 It’s not much, but it doesn’t need to be.