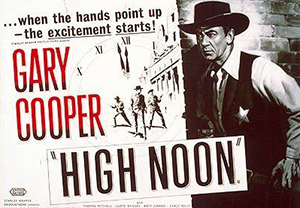 Our Tuesday night tweet-along featured High Noon. Monday’s show was a radio adaptation (Shane) whereas this one was the soundtrack of a film. It made an interesting comparison. The radio program actually had less sound production – a lot less – and let the dialogue carry the story. The sounds played an important part, and were very effective, but they were simple and to the point. The movie had a wealth of sound and a rich use of background music, which told stories by itself.

The music in the background really sets up the scene and creates the tension. Shout out to #audio! #western106 — Jenna Steele (@jsteele_ds106) February 10, 2016

It also had a lot of dialogue, which was why I picked it. It was occasionally hard to understand what was going on without any visual cues. Scenes would change, but we couldn’t tell by listening. It became problematic at the end though. Everyone picked up on the drama of the showdown.

It’s amazing how action and tension in a scene can be displayed just from music and sound effects. #western106 — Liam Caudill (@liamcaudill) February 10, 2016

What a dramatic ending to #western106 #ds106radio, so glad I tuned in tonight for such an intense and interesting story!

We knew people were shooting, but we didn’t know anything beyond that. So here’s the final showdown:

We missed a lot of that part of the story by not seeing it. I think it was a worthwhile experiment anyway though.

And a good time was had by all.

That was actually a lot of fun! The tweet-a-long was definitely helpful as well! I can see why radio shows were so popular! #western106

This entry was posted in Uncategorized and tagged ds106, ds106radio, high noon, wesern106. Bookmark the permalink.

1 Response to High Noon at night