A Metafilter post on a history of GIFs made me think of those animated ads from LowerMyBills.com that were floating around the web ten years ago or so. So when I saw today’s Daily Create, I knew what had to be done.

Unfortunately, it was a lot more work than one should ideally do for a Daily Create. I forget where I found the GIF, but it had two major problems: 48 layers, and text on top of the part I wanted. First I opened it up in Photoshop and deleted 2 of every 3 frames and layers to make it a little more manageable. That left me with 16 to deal with. I used the Select Color Range function to capture the silhouettes, then used Invert Selection so I could delete the rest of the image. I had to do this on each layer. Then I had to clean up some leftover artifacts from the text, layer by layer. I also made the background of each layer the same color as the sign, although in retrospect there were easier ways. After all that tedium, I had to think about how to best get them on the sign. I measured the pixel width of the sign and resized the GIF to match. I went to the sign image and covered up the silhouette with the sign background color, so I had a blank sign to work with. I could have made 16 copies of the sign image and pasted each layer of the GIF onto a different one, but that would have meant more tedium, and I probably never would have aligned the layers right. So I measured the pixel distance from the top and right ends of the sign to the top and right edges of the image, and increased the Canvas Size of the GIF by adding those numbers to the top and right. 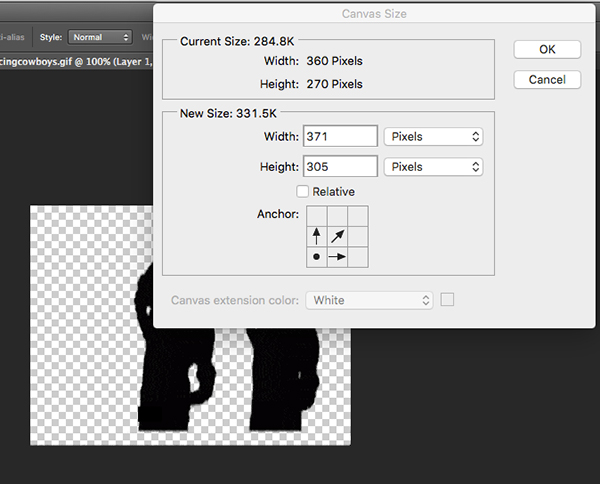 Then I increased the Canvas Size again, on the bottom and left, to match the size of the sign image (640 x 480). This put the cowboys in the same area as the sign. I made a new layer on top the the 16 I had in the GIF, and copied the sign image into it. It took a little thought, but saved a bit of time and effort. I used the Magic Wand tool to select the yellow of the sign and deleted it, leaving a window to see through to the cowboys.

It still needs some cleanup at the bottom of the animated part, but I’m not going to worry about it. I feel like it needs something else, like it’s incomplete, but again, I think I’ll leave it as is.

3 Responses to Beware of Dancing Cowboys