This week in The Internet Course we’re covering privacy & openness. The readings the class came up with in the research process mostly deal with privacy and related issues: hacking, cybercrime, identity theft, anonymity and surveillance. Zuckerberg has said the people don’t care about privacy, and people prove him right every day. Yet these articles, and many others like them, also prove him wrong. Maybe people are of mixed opinion. Maybe people are un- or under-informed. Maybe people don’t think things through. Most likely it’s all of the above.

But the openness side of the equation is just as important, if not more so. So I thought I’d take a look at it.

Open can have many meanings and implications. With regards the the web and the internet, there’s open source, open standards and protocols, open architecture … Open access is an issue much discussed in my field. Openness is baked into the DNA of the internet – connectivity and interoperability require it. And the openness of the internet enables an open sharing of thoughts, ideas and information on a whole new level. What can be accomplished through humanity’s collective creativity remains to be seen, but if history is any guide it will be profoundly transformative.

I made a little Cmap of openness as seen through three articles: 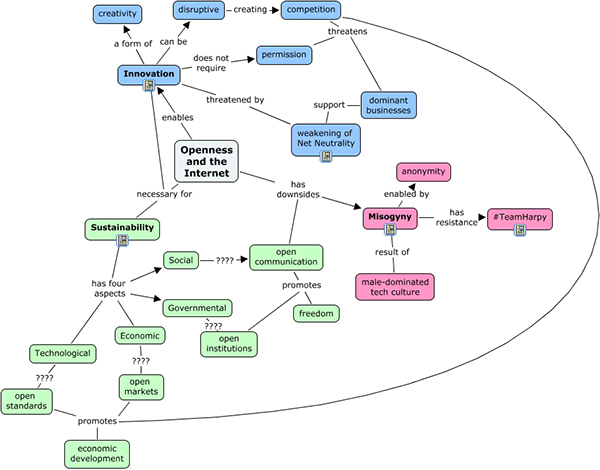 The Internet Society published a position paper last year on openness and sustainability. They visualize a virtuous circle of openness, with universal benefits for everyone derived from four principles: 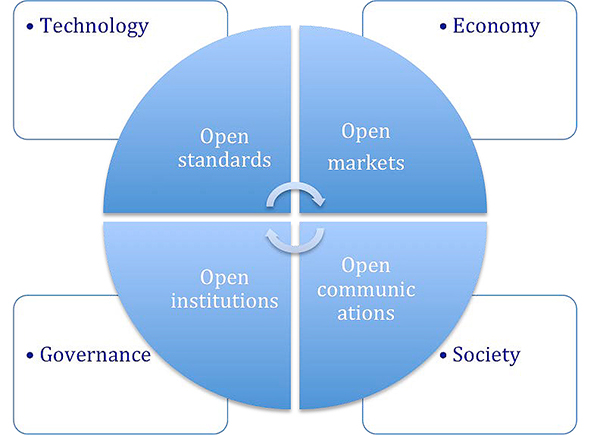 They further discussed openness as an enabler of innovation

Sir Tim Berners-Lee did not have to ask a central authority whether or not he could write a client-server hypertext system. He wrote it; others who found the possibilities interesting downloaded clients and servers and started using it.

The article recognizes that there are IP issues that need to be negotiated with regards to an open environment. We touched on that issue this past week with the Lessig video.

There are down sides to openness, however. Allowing people to say and do things anonymously lets some people get away with putting their worst sides forward. Bullying, harassment and threats are unfortunately common online.

Astra Taylor’s article discusses the hostility that women face in the online environment and in tech culture. That makes for a vicious circle, inhibiting the diversity which could counteract the hostility. In a way, that’s opposed to openness, as it pushes people out. But it’s a result of being open to certain types of speech and behavior that are less than acceptable.

The internet lets people call out that kind of misbehavior, but there can be costs to that. Real costs, in fact. In my world, libraryland, two people called out an individual for repeated and persistent sexually aggressive behavior and were hit with a defamation lawsuit as a result. But it has served to bring the issue to the attention of many who would otherwise be unaware.

This entry was posted in Uncategorized and tagged cmaps, privacy/openness, tic104. Bookmark the permalink.