A day late and a head short 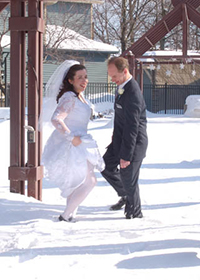 So I’m a day late in getting to the autodecaptiation challenge. This assignment was a problem because I don’t have many pictures with my head in them. I tried using one of my wedding pictures, but trying to reconstruct the background behind my head was more trouble than it as worth. And my wife thought it was creepy.

But then I thought of my picture from the other day. That should be pretty easy since I already had a background. It would have been easier if I had saved a layered file, but I didn’t so I had to reconstruct it. While I was at it I put that little light reflection on the top layer so it looks more like I’m behind the lens. And that’s not creepy at all.

1 Response to A day late and a head short