The Dead Eyes of Dr. Dracula 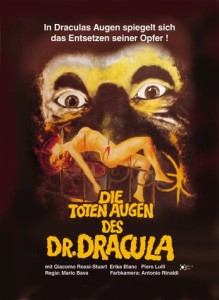 Next in line on the Bava film fest is Kill, Baby… Kill! – Operazione paura (Operation Fear) in Italian, and known in Germany as Die Toten Augen Des Dr. Dracula (The Dead Eyes of Dr. Dracula). Bava’s titles frequently played off of other films of the day. The American title is reminiscent of Russ Meyer, which is bizarre and misleading, if it was intentional. The Italian title is more like a spy adventure title. Someone connected to the movie or the studio told Lucas this was because one of the actresses starred in such a film, but Lucas found no evidence to support this. The Dracula connection implied by the German title is certainly misleading, and nonexistent in the script. It seems like this kind of marketing effort would backfire, although it was probably common enough among B movies at the time that it didn’t fool many ticket buyers.

In all the Bava films we’ve looked at up to this point, Ubaldo Terzano had been the cameraman. Lucas spoke of his importance to the look of Bava’s films in the commentary on Blood and Black Lace. He had stopped working with Bava by the time of Kill Baby Kill, and I think it shows. There is a subtle but definite difference in the look of this movie. There are a lot of things that could account for that: budgetary pressures could impact the quality of the lighting, the type of film stock used, or the quality of the film processing. But I suspect the eye behind the camera had a part in it as well.

One of the recurring themes we’ve seen in Bava’s work is the idea that appearances are deceiving. It manifests itself here with Ruth, the black-garbed witch who is the true hero of the story, and with Melissa, the angel in white kill baby who brings doom to whoever sees her. The part of Melissa was played by a young boy, Valerio Valeri. I’m not sure why Bava chose a male to play the character, but I think it does provide a creepiness to her appearance. You can tell by looking at her that something isn’t quite right.

Hitchcock connection – we saw this before in The Girl Who Knew Too Much, and it’s here again in the spiral staircase in Villa Graps. Steve Kaye pointed this out before. The part of the opening scene focusing on the feet walking down the stairs is also reminiscent of the beginning to Strangers on a Train. Spiraling seems to be a theme in this movie. The camera spirals around during the opening credits, the spiral staircase, Dr. Eswai chasing himself in circles, Ruth’s talk of the circle of death at the end, all suggest the idea that what goes around comes around.

This entry was posted in Uncategorized and tagged killbabykill, mariobava. Bookmark the permalink.

2 Responses to The Dead Eyes of Dr. Dracula