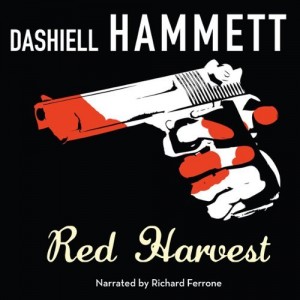 I decided to listen to Red Harvest as an audiobook, to make better use of my drive time. Audiobooks are a different experience. The narrator’s voice becomes a part of the story, and there are pros and cons to that. Neil Gaiman’s accent suits his prose perfectly in The Graveyard Book. On the other hand, Reed Diamond’s reading of David Simon’s Homicide  is marred by his having been possibly the most annoying character on the TV series of the same name. Red Harvest is read by Richard Ferrone, who I don’t think I know from anywhere, but his gravely voice works well with the hardboiled genre.

One of the issues I take with audiobooks, and e-books for that matter, is that they fail to take advantage of the form. It’s like if they decided to make a film out of Gone with the Wind by scrolling the text of the novel across a movie screen. What could you do with an audiobook if you used multiple voices, sound effects and music? A well-written story doesn’t need any of that, of course, but the power of the medium could be used to enhance or transform the experience.

So I decide to experiment. I took a short section of Red Harvest and backed it up with a Blind Willie Johnson recording, Dark Was the Night, Cold Was the Ground from the open source audio section of the Internet Archive. I think it adds to the mood. I also tried running several quotes over a Miles Davis track from Pangaea. I like the way the drums propel the words, and the effect that short silent part has. Part of my inspiration for these music choices comes from the 1990 neo-noir The Hot Spot which had a soundtrack featuring John Lee Hooker and Miles Davis, among others: Two great sounds that go great together. Of course I’m just mashing together a couple things here. If I were to be really creative, I’d read passages with my own voice, in my own interpretation, and put it together with something from Freesound or some other open-source audio source.

This entry was posted in Uncategorized and tagged hammett, hardboiled, redharvest. Bookmark the permalink.

1 Response to The noir sound