The first thing that caught my eye was actually in the comment section, right at the top: “I feel more supported and capable in less than 25 minutes with Bob Ross than I have in 24 years with my family.” I can’t quite agree with it because my family has always been supportive, but Bob definitely projects an aura of calm encouragement. “You can do it. It’s that easy.” In an early part of the episode he shares a story:

Recently, we had our teacher’s reunion. We had a gentleman with us, Mike Goracke, who had never painted in his whole life, and he works with a paint company. So we got that rascal up in front of all these certified instructors from all over the world, and we had Mike paint his first painting, and he did a beautiful job, and this is the one that he painted. There. So I wanted to share that with you.

It’s a little illustration of what he says throughout his series. Anyone can do it. Anyone can make something beautiful. Making art can also be a lifelong struggle, but that doesn’t fit as neatly into a half-hour show.

The other thing about this episode is that he’s doing a different technique. I don’t think I’ve seen him try this approach before. What he does is make a painting in grayscale, or black and white if you prefer, and then colorizes it, like in ancient times when they hand-tinted B&W photographs. Maybe that’s something we will want to experiment with. I did a little of it a few weeks ago but I kept the colors so faint that they’re a bit too inconspicuous. But it’s interesting how Ross doesn’t take much paint to bring a whole lot of color into the picture. 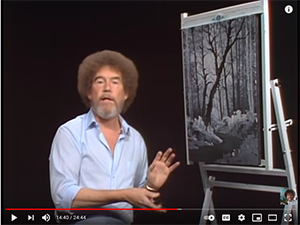 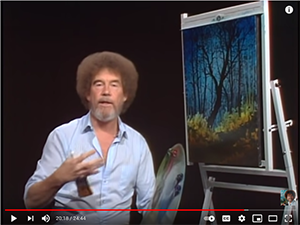 He also goes low-tech with his tools:

Now, this takes a very complicated tool.
This is called a foam brush.
That’s all it is.

The paper towel was likewise complicated. I think this is a great point. You don’t have to have the high-end expensive tools and equipment to make art. I’ve been learning to use OBS for video and the GIMP for image editing. There may be easier tools out there, but these are free, and I can look up anything I can’t figure out. And that’s another joy of ds106.

This entry was posted in Uncategorized and tagged ds106, rossthoughts1. Bookmark the permalink.