And it got me thinking. Some time ago I stumbled across All of Billy Joel’s songs played at once, slowed 8x (Youtube). What if I did some similar evil? I remembered there was an audio assignment about Paulstretch which I always thought was kind of stupid because it doesn’t involve any real work. So here’s my chance to try it. I went to Audacity and imported all the songs at once. 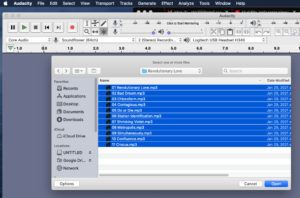 The I used Paulstretch with the default settings. I tried to increase the stretch first, but it was going to take about 4 hours to process and I didn’t feel like waiting. Then I used the Mix & Render function to mix it all down to one stereo track. For whatever reason it wouldn’t let me listen to it, so I just exported it as an mp3 and listened in Quicktime. Sounds creepy enough. As I started to write this up, I reversed the “love” in the title to make it sound evil. That gave me another idea. I imported the track into Audacity again, deleted everything after the 5 minute mark because no one would listen that long anyway, and used the Effects-Reverse function to run it backwards. I’m not sure that it actually sounds any different. But if you ever need 5 minutes of creepy background noise, feel free to borrow it.