“All the pieces matter” 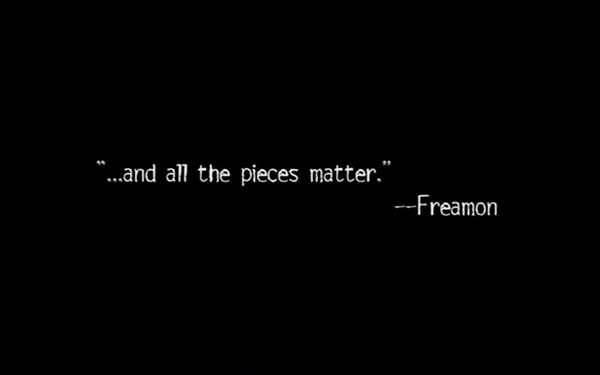 In Sidney Lumet’s great book, Making Movies, there’s a section on art direction, part of the design of film, where he points out that every little detail we see or hear in a scene is deliberate and planned, right down to the hangers in a closet. As Freamon said, “All the pieces matter.”

So when I was re-listening to parts of Limetown the other day, this line caught my attention:

I liked Tuesdays because they played older films at the theater. The Little Foxes, City Lights, Double Indemnity.

I thought there must be a reason why those three films were mentioned. This was in the second episode, “Winona.” The title character was talking about her life in Limetown – what she did there, what she liked about the town… Double Indemnity I knew of course, a noir film about cold-blooded murder for profit. City Lights was a Chaplin film from the silent movie days. I’m sure I saw it as a child, but I didn’t remember anything about it. According to Wikipedia, it’s about the rich and the poor, and a life-changing operation that lets a blind girl see. The Little Foxes was a new one to me. It touches on similar themes – the haves and have-nots, the idea of blindness (the daughter’s naivete), and murder for profit, as the mother drives her husband to a heart attack. In the context of the Limetown story, the three films are relevant and meaningful, much more than just a passing detail.

Bette Davis and Herbert Marshall in The Little Foxes

This entry was posted in Uncategorized and tagged design, limetown, the little foxes. Bookmark the permalink.

2 Responses to “All the pieces matter”