I don’t like to give too many examples because I’m afraid people will follow them like template. But since I threw everyone in the deep end and had you create assignments in the second week, here’s an assignment idea I had.

Back in the 60s there was a proto-steampunk western TV series called The Wild Wild West. It had this animated title sequence:

I liked the multi-panel comic-book feel of the image. At the commercial break at conclusion of each act of the show, the scene morphed into an illustration which became one of the panels, ending up like this: 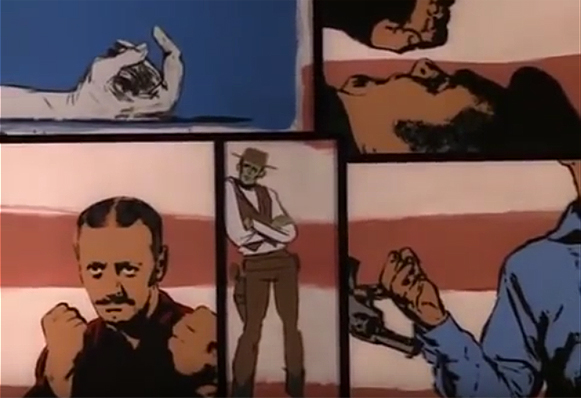 Your assignment, should you choose to accept it, is to take a Western, pick out a few key scenes, and arrange them in a comic book page style image a la The Wild Wild West. The challenge is twofold: to create a visually interesting arrangement, and to give it that hand-drawn appearance. Whether you do the latter through image manipulation, tracing or drawing is up to you.

So I wrote that up and submitted it as an assignment, which you can find here. I’m not saying anyone has to do it (except maybe me), but if anyone thinks it looks like a fun thing to try, it’s there for you.

This entry was posted in Uncategorized and tagged DesignAssignments, ds106, western106. Bookmark the permalink.