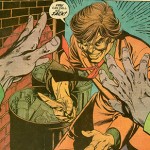 We had another good group for our fourth ds106radio listening and tweeting session. After some spooky sounds and a bumper we had the Mystery Playhouse rendition of “Yours Truly, Jack the Ripper” which was originally written by horror master Robert Bloch. We used this before in the noir class, but I thought it would also make a good fit here, with the horror and comic book theme. The show featured an excellent example of horror-hosting:

is that the great Peter Lorre on #ds106radio?

The show, like many of the others we’ve listened to, showed how simple sounds effects can establish a setting

@BloodyFace106 the phone was cool too! Love all the old fashion sound effects

Another great audio ambience, the party scene-how crucial continuity of background sound is for depth and texture of a scene. #ds106radio — Jim Groom (@jimgroom) September 25, 2015

The depth of sound makes it seem like this is taking place somewhere larger than a radio booth. #ds106tales 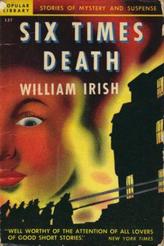 The second half featured “The Night Reveals” by Cornell Woolrich which was more thriller than horror, but it did have an edge of psychological terror in that the husband wasn’t quite sure if he knew who his wife really was. But it turned out they were a perfect match. This production, like the other episodes of Suspense we’ve listened to, comes from Blue Hours Productions who have been remaking ancient radio dramas with modern recording equipment. What you lose in old-time ambience you gain in clarity.

I really appreciate the clarity of this audio. And, I’m personally a fan of this first person narrative style. #ds106tales — Jimmifer Lawrence (@jaaaaamesrives) September 25, 2015

The background sounds were well done. Sometimes they identified the setting, like the traffic running through wet streets, but they also added to the drama – the tea kettle whistling louder and louder as he came to a realization, or the argument on the TV in the background as tensions rose between the two characters. All in all, two great audio productions.

Props go out to @BloodyFace106 for participating in all four broadcasts, and to @TheHeadReaper for multitasking

@phb256 I liked the older recording too, it was just difficult to understand what they were saying while listening to a biology lecture haha

although I’ve heard you’re not really supposed to do that. Our participants for Thursday’s dramas were:

This entry was posted in Uncategorized and tagged ds106, ds106radio, ds106tales. Bookmark the permalink.