We had a great live tweeting session last night with Mildred Pierce on DS106radio. Everyone seemed to be involved and enjoying it. A few things stood out to me.

The first, as we have seen (heard actually) consistently in these sessions, was the impact of sound. Simple background sounds create a sense of place. There’s something poetic about how a little crowd noise and some clinking glasses paint a picture of a restaurant. Sounds define action as well, like in the scene where Bert stormed out of the restaurant away from Monty and Mildred. All we heard of Bert’s reaction was breaking glass, but that was all we needed in the context of the scene.

One thing that was different about this production was that it seemed rushed, or abbreviated. When we listened to The Maltese Falcon and Double Indemnity the stories felt complete even though they were significantly shorter than the films. Last night’s program was missing the depth of Cain’s story or the build-up of Curtiz’s film.

Instead of the soap commercials we heard in earlier broadcasts, this time we heard pro-US infomercials, which seemed bizarre. The show aired in June, 1954, which was after the Korean conflict, but the Cold War was still going strong.

Apparently propaganda works. Some students want to jump on the bandwagon:

This is in reference to The Vignelli Canon from last week(http://noir106.us/weekly-assignments/week-5-the-design-of-noir/), where the designer/author makes a disparaging comment

The United States uses a basic letter size (8 1/2 x 11”) of ugly proportions, and results in complete chaos with an endless amount of paper sizes. It is a by-product of the culture of free enterprise, competition and waste. Just another example of the misinterpretations of freedom. 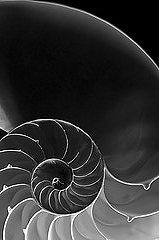 The European standard is based on the Golden Ratio which has proportions based in nature, which are somehow naturally appealing. Having studied design long ago, I can see that appeal, but I don’t know why it works. Squares and circles are easy to understand. The golden rectangle is based on both, so that probably has something to do with it. I found a short article from The Atlantic which points out some of the design problems with the 8.5 x 11 size. I also found something from the American Forest and Paper Association through the Wayback Machine that explains the origins of the size. This supports Vignelli’s point that the standard is based on economics rather than aesthetics. Most of us don’t see that as a problem because we’re inundated with the 8.5 x 11 size. It makes our environment a little bit uglier, but we get used to it or we accept it as the way it is. Not that that is a good thing.

We had a good crowd tweeting along. The participants were:

and on Monday, for Strangers on a Train, we had:

This entry was posted in Uncategorized and tagged ds106, ds106radio, mildredpierce, noir106. Bookmark the permalink.

3 Responses to No wire hangers