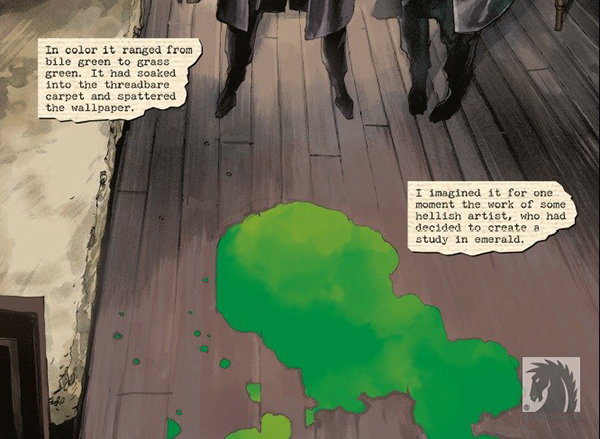 I want to muse on how A Study in Emerald fits in with our theme. I think of superheroes as a kind of modern mythology, with the tales of adventure and triumph and good vs. evil all mapping to ancient hero myths. While not quite explicitly stated, Gaiman’s story is a tale of Sherlock Holmes, who qualifies as a proto-superhero and a spiritual father to the Batman. The story also brings in Lovecraft’s Cthulhu mythos, making a second connection. It may not be true legend or myth, but we’re not being academic about it. It also ties in Frankenstein, Dracula, and Dr. Jekyll and Mr. Hyde with those little advertisements interspersed throughout the text. 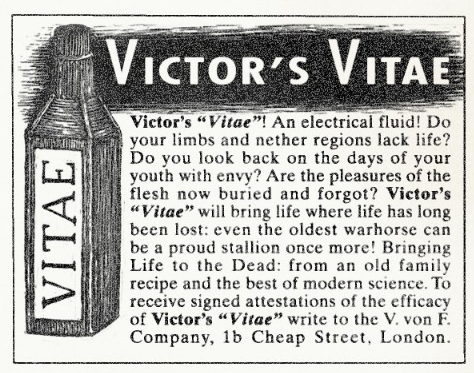 But there’s that neat switch towards the end of the story, when we realize that we’re not dealing with Sherlock as the hero, but rather the killer. Or maybe, since the story is in some kind of upside-down where the green-blooded Old Ones rule humanity, he is a hero as part of the resistance, and Moriarty is a villain for collaborating with their rule.

I also think it fits the course well due to the way it’s been reformatted. As I understand it, it was originally published as traditional text, then reformatted in a newspaper style for the web. This serves as an example of design in storytelling. The typography and ornamentation give it a sense of age that complements the text. I especially like the way the ads were done. Gaiman also put this out as audio, where the ads are presented in a style reminiscent of radio sponsor announcements. The story has also been done as a graphic novel, I’ve just found out. I’m not sure if it helps to have it visualized – the Old Ones are more mysterious in the imagination than in images – but I might need to give it a look.

What the story does is remix and mashup modern myths to make something new, interesting in itself, but the richness of the story comes from its connections, how it is situated among other familiar tales. That’s a way we can use myth and legend – as a foundation to build on, as something to allude to, to give color and deeper meaning.

This entry was posted in Uncategorized and tagged a study in emerald, ds106. Bookmark the permalink.