A Host of Horror Hosts 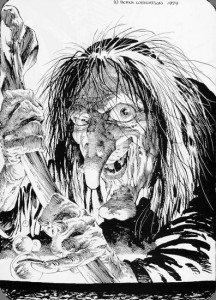 The Old Witch by Bernie Wrightson from http://comicartcommunity.com/gallery/details.php?image_id=1057

The Crypt Keeper, The Vault Keeper, The Old Witch – these were hallmarks of the old EC horror comics. They’re part of a tradition of horror hosts that had a long-time presence on television. Elvira may be the most famous of the TV hosts, and Svengoolie, (lamely) continues the tradition. The TV hosts were pre-dated by the comic book versions, who took their inspiration from hosts of radio serials.

One of the things we’re doing in Tales from ds106 is adopting the host concept to make an ongoing anthology of the course. Every student will get the chance to play host for a week, providing commentary for curated compilations of the best work of the week. Given the ratio of students to weeks, there will be two or three hosts per week, and they will have the option of working together or going it alone, as well as generally having the option of which media they want to work in. I’m hoping this will really tie the class together. 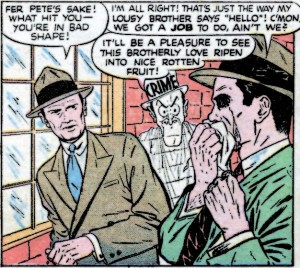 Since the students will be acting as hosts, we’re asking them to create host characters. It’s not a big challenge, since the hosts all tended to be simple, flat characters, but it is a creative opportunity and we expect to see a range of characters emerge. The EC gang, collectively known as the GhouLunatics were characterized by morbid humor full of puns and alliteration, but they were fairly indistinguishable from each other, except for appearance. The later DC Comics hosts, Cain and Abel, had distinctive characteristics, and a rivalry similar to the GhouLunatics. An earlier host, Mr. Crime from Crime Does Not Pay, was a ghost with fangs and a top hat labeled “Crime.” (Technically, crime and horror are separate genres, as is sci-fi, but there are overlaps, and we’re all about expansive views anyway.) Mr. Crime introduced stories and gave running commentary throughout, apparently enjoying both criminal activity and criminal justice. The Whistler hosted a 40s radio show of the same name, dealing with mystery and crime tales with twist endings. Like the Hitchhiker in the 80s, the Whistler played a wanderer who picked up tales during his travels. Some celebrity hosts, like Peter Lorre on the radio and Alfred Hitchcock and Boris Karloff on television, played public personae based on their work in cinema. And then there is the case of MST3K, where the hosts inhabited a whole backstory situation. There are many directions one could take with a host character, and it will be fun to see how the class develops its collective personality.

This entry was posted in Uncategorized and tagged ds106, ds106tales, horror hosts. Bookmark the permalink.

1 Response to A Host of Horror Hosts