Round and round
What comes around goes around

Profound words of wisdom from 80’s hair-metal masters, Ratt. These came to mind as I was reading Roland Barth’s 1977 look back at open education. I was also reminded of my experience weeding the Education section of our library collection, when I found book after book from the 70s examining issues that are still being examined today. What goes around comes around, give it time.

Open education meant something different to Barth though. It was a term created by American education researchers to describe practices that were going on in British primary education in the 1960s. Their practices were not coordinated or based on any grand theory, but rather something that grew out of the conditions of the times.

This reminds me of film noir – a genre label applied after the fact to some early 40s cinema. French critics, looking at Hollywood’s WWII product en masse after the war, saw trends and commonalities among some films and called them noir. The filmmakers themselves were not consciously trying to create or be part of a movement. They were just making movies.

Of course, the act of defining open education closed it in a way, replacing the autonomy that the British teachers had with “prescribed and proscribed materials and equipment, codified and circumscribed teaching behavior.” Coming round and round to more recent years, this makes me think of MOOCs, which began as a fascinating experiment, full of possibilities, and quickly got defined down to broadcast lectures, guarded by log-ins. Footloose to danger zone.

Plus ça change, plus c’est la même chose. It can be an evolutionary cycle rather than a hamster wheel though. We can learn from our experiments. We can learn from our history, if we acknowledge it. We can refocus on our values and philosophies, on the human element of education. Which leads to a cartoon which was adjacent to the article: 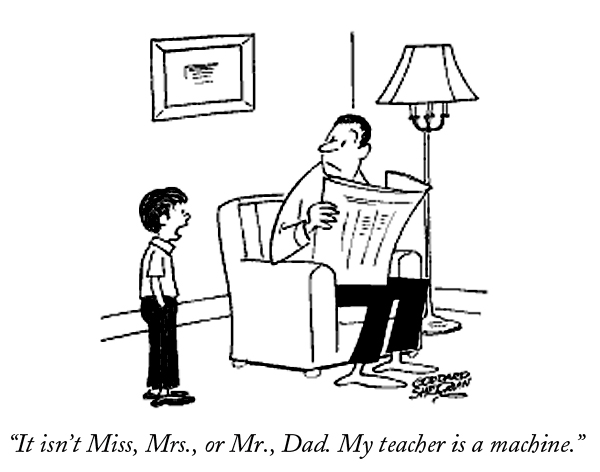 This entry was posted in Uncategorized and tagged opened. Bookmark the permalink.

5 Responses to Round and round