Evolution of the Internet discussion 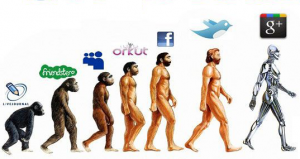 Tuesday’s panel discussion in The Internet Course took a while to find its rhythm, due to technical difficulties. Technical difficulties on my end, and between there and the class, made it difficult for me to keep up with it as well. But some good points were made in spite of it all.

We talked a lot about online dating, and while some of that might have meandered, it does touch on the way the internet has become entwined in our lives, how its a place where we live. In a way, we’re evolving with it.

The Wizards book talks about how they worked through the challenges of getting two computers to talk to each other, to connect. That grew into the ARPAnet and eventually into the internet as we know it. In that video from the 90s we saw how the internet had moved from connecting computers to connecting people, which, as Tim Berners-Lee says, is what the web is all about.

In the 90s video, we saw Howard Reingold talking (YT) about that very thing, people connecting in online communities, a nascent thing at the time. As online community has evolved, so has our sense of how we connect to each other, which we touched upon in Tuesday’s conversation.

The other thing that interested me about the video was the question of what makes the internet different from Prodigy or Compuserve. Brendan Kehoe responded (YT) that the internet is not owned by a company or a conglomerate. I think that’s been evolving in a way, as Google has an outsized influence on the web and how we experience it, along with other large online portals that determine what to show based on personalization algorithms.

I’m looking forward to where Thursday’s discussion takes us.

This entry was posted in Uncategorized and tagged evolution, tic104. Bookmark the permalink.