Fat cats make art better. I’d never thought of that, but I wish I had. My in-laws have a cat they call Fatty. She looks like swallowed a football helmet. The photos they sent don’t do her justice. Since her proportions are surreal, I thought of Magritte: 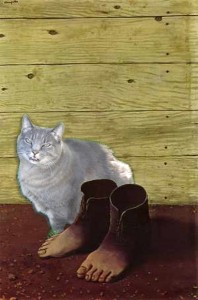 But on the other hand, Jasper Johns is one of my favorite artists: 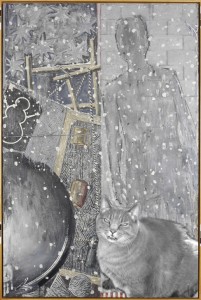 She seems to fit there better.

How I Did It: basic photoshoppery. The original photo of Fatty had her sitting on the lawn, which is why she has that greenish aura in the Magritte mashup. I used some feathering on the selection and picked up some background. I duplicated the background layer and used the magic wand to get the wood in the background and deleted it. Then I traced around some of the left shoe-foot and cut out that background. I put the cat behind the duplicate layer so it looks like she behind the shoes. There’s a lighting problem though.

For the second picture, I made the cat cut-out black and white to get rid of the green aura. Then I stuck her in the corner and trimmed a little off the side and bottom so it looks like she’s inside the frame. It almost seems like she belongs.