The Dark Side of the Bob 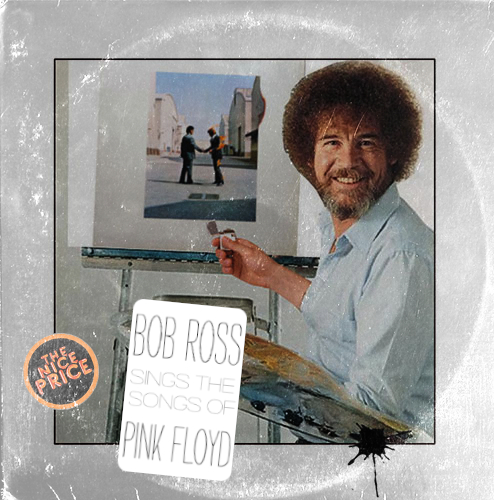 There was a Daily Create last week about what was going on just off the album cover image. I think someone had Wish You Were Here in there and that gave me the idea to have Bob setting it on fire. I had used the Bob Ross Troll Meme Generator before, so all I needed was to put a lighter in his hand. It took a bit to find the right image, and it still doesn’t look quite right but it’s close enough. Friend of ds106 Todd Conaway added an ink splatter:

I'll see your painting on fire and raise you a paint drip 🙂 for the floyd aficionados…. @courosa pic.twitter.com/jbOTcmPr81

so I figured this needed to be an album cover. It already looked like one. I just needed to work out some details. I googled for an image of album cover wear and found a couple good possibilities. I brought the images into the GIMP and played with the layer blending mode until it sort of looked like an old LP. 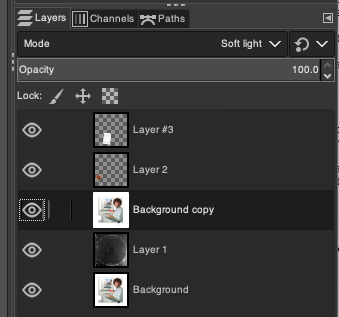 I stuck on a Nice Price sticker that used to show up on bargain LPs. I thought of a pretty obvious title, Bob Ross Sings the Songs of Pink Floyd. I even went further to come up with an appropriate track list:

Any Colour You Like
Behold the Temple of Light
Empty Spaces
Grantchester Meadows
Green Is the Colour
The Happiest Days of Our Lives
In the Beechwoods
Obscured by Clouds
Paint Box
A Pillow of Winds
Several Species of Small Furry Animals Gathered Together in a Cave and Grooving with a Pict
The Show Must Go On
Soundscape
Two Suns in the Sunset
What Shall We Do Now?

They’re in alphabetical order because I took the titles from a list of Pink Floyd songs. I didn’t find a good way to incorporate these into the design though. Maybe I should have done a back cover too.

For the title font, I had the idea to use the typographic style of the titles from Dr. Strangelove and Stop Making Sense. This might subtly indicate that the recording is a tragedy/farce, and somewhat artsy. I found something usable on the MyFonts site. I tried arranging the title text above the image, but it didn’t look right. This was actually the hardest part of the process because I tried to do it on my Macbook Air using a trackpad instead of a mouse. Wrong tool for the job. Then I went back to the sticker idea. Sometimes record companies would add stickers on top of the shrink wrap, with no regard for placement or design. So I made the title into a sticker and put it on the cover semi-haphazardly.

I think it came out okay. The Nice Price sticker looks like it’s printed on the cover rather than stuck on. I fiddled with it for a while but it didn’t improve. When I took away the worn look it didn’t look like it belonged. I thought we had an album cover design assignment in the Assignment Bank. There are a couple that come close, but don’t quite fit the bill. Maybe this should be a new WWBD? assignment.

This entry was posted in Uncategorized and tagged bob ross, DesignAssignments, ds106. Bookmark the permalink.

1 Response to The Dark Side of the Bob