The book behind the book

Sinclair Lewis’ novel, It Can’t Happen Here, contains numerous references to a fictional book entitled Zero Hour – Over the Top. I thought I’d pull out all the excerpts and put them together here, along with a few thoughts. 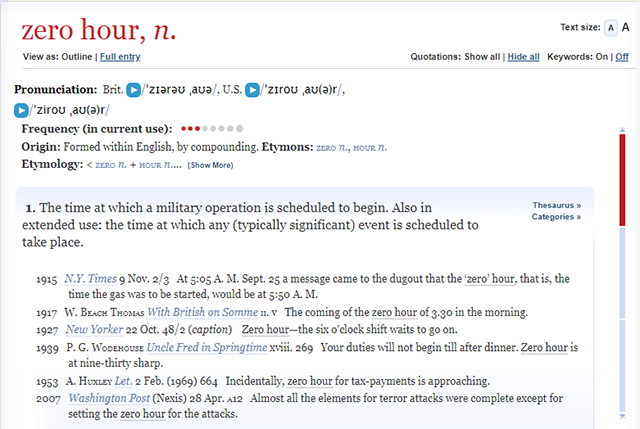 “Zero hour” and “over the top” are both phrases from WWI. OED lists the first use of “zero hour” in an NYT article on an ill-fated military operation. “Over the top” comes from WWI trench warfare, referring to soldier coming out of the trenches and up into the battlefield – up into machine gun fire. The title is meant to evoke a sense of patriotism, as the US played a large part in winning the Great War a little less than two decades earlier. But there is also a destructive fatalism about it – it suggests that it is time to jump into the meat grinder. The screenshots below are linked to Hypothes.is highlights, so you can click through to see them in context. 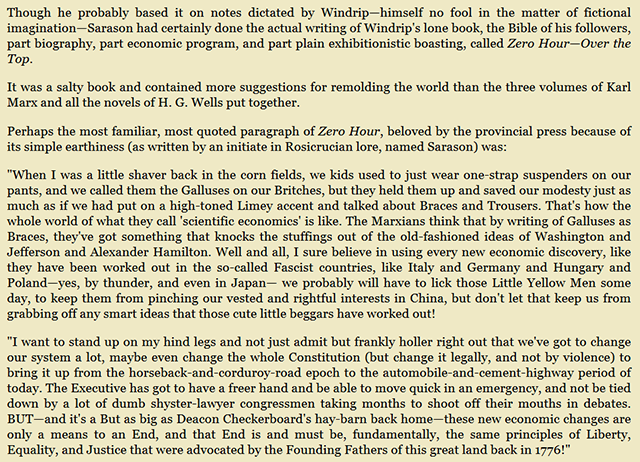 Note the contradictions – Washington and Jefferson are old-fashioned, yet the goal is to get back to the Founding Fathers’ principles. But maybe change the whole Constitution. The sense of nativism coupled with a sense of cultural inferiority. The claimed desire to do things legally while also claiming a need to be above the law.

Interesting how family, public interest, and humble delights describe Doremus Jessup. Also how he equates vulnerability with divinity. In describing the Press he’s actually describing himself.

He promotes intolerance and increases poverty through his words and actions, rather than slashing them. He aspires to be an emperor, yet claim kinship to the Common Man.

“Protestingly” implies that he doesn’t want the spotlight that he seeks. He’s also making another claim to divinity. 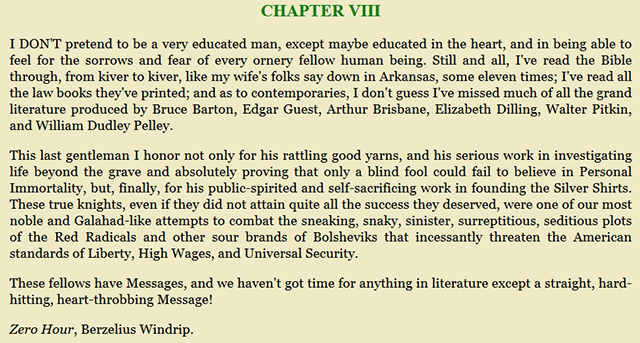 William Dudley Pelley and his Silver Shirts may have been models for this novel: https://en.wikipedia.org/wiki/Silver_Legion_of_America. Who are the real threats to “Liberty, High Wages, and Universal Security?”

He’s describing the identity politics of white supremacy, and calling for sacrifice on the part of the people for the benefit of those in charge.

a misrepresentation – the quote comes from the words of the king of Assyria https://www.biblegateway.com/passage/?search=2+Kings+18%3A31-32&version=NIV

This entry was posted in Uncategorized and tagged it cant happen here, zero hour. Bookmark the permalink.