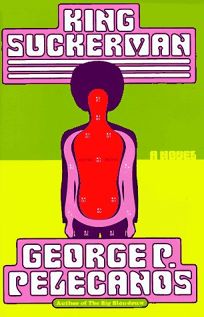 A while back, I listened to the audiobook version of George Pelecanos’ novel King Suckerman, as read by Cary Hite. It’s a story of more-or-less ordinary guys who get themselves drawn into violent criminal melodrama. Good fun. Like many of his novels, this one is crawling with pop culture references, to movies and music, popular or not in, the mid-70s, as the book is set in 1976. I thought it might be interesting to make a playlist out of the songs in the book. So I skimmed through it and marked them, and made a spreadsheet out of it. I decided to limit it to songs that were named by titled or identified by lyrics, so even though they discuss Mott the Hoople, also referred to as Mo the Rooster, at a few points in the course of the book, I’m not including them because the text never references a specific song. Here’s my list:

Then I got the idea to use narration from the audiobook as intros to the songs. This was a little tedious. I had to find each point in the narration, then play it through SoundFlower and record into Audacity to get the intros. Then I put each of those together with the respective song from Youtube. There was one track by Edwin Birdsong that I couldn’t find. I left that one out. I strung the others together, into three ~1 hour mixes and put them on Mixcloud.

At some point I should go back and listen to on of them straight through, to see what sort of impression the playlist give of the story.

This entry was posted in Uncategorized and tagged King Suckerman, pelecanos. Bookmark the permalink.