On the first day of the Digital Pedagogy Lab Institute, we were challenged to draw our ideal classroom. Some random thoughts: 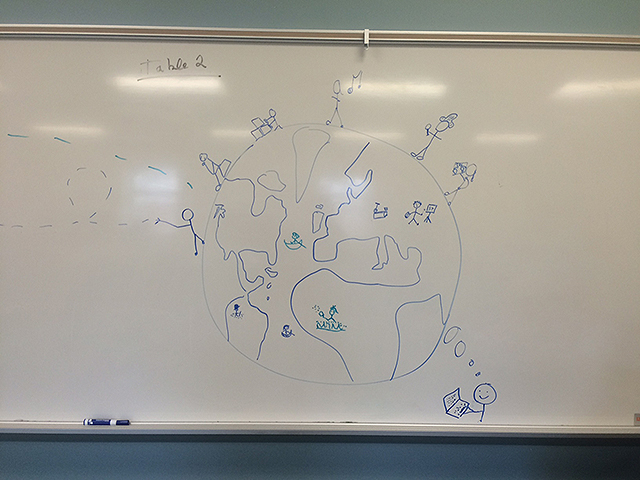 This group used an explorer metaphor. We see builders, travelers, a thinker, Dora, Sherlock… the figure at the bottom represents students as world-makers. So the whole world is a classroom, and may things, or anything, we do can be learning activities, if we’re open to it and use our imaginations. 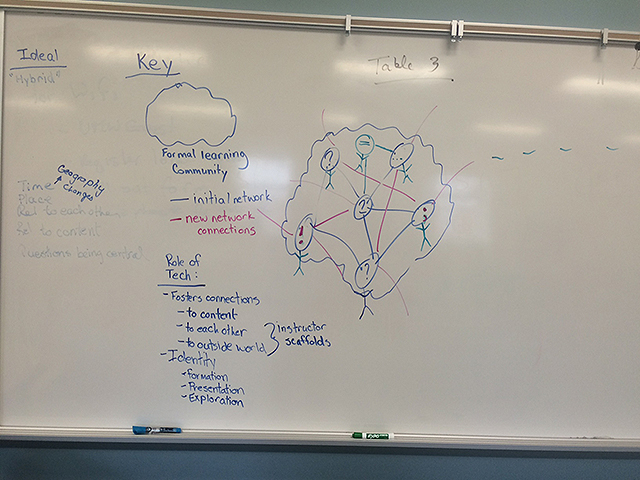 This is built from a simple network visualization – I’ll take credit for the lack of imagination there – but with several things built onto it. The different colored lines connecting the nodes represent a change over time – new connections among each other, and more connections to the outside world. That dotted line on the right connects to the world in the drawing above. We started out with a question mark on each node, since we all have something to learn, but we changed that since not everyone comes to class with questions, and we experience different states as well – sometimes we connect, condense, exclaim, equate – there are lots of ways to read that. The teacher is part of the group. It’s a community of learners. 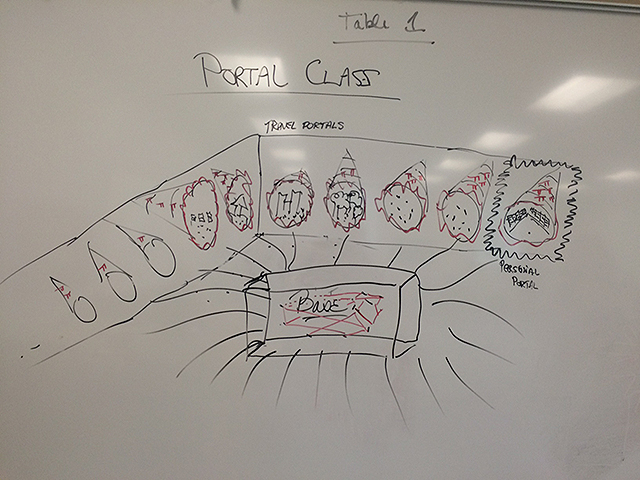 This diagram brings together ideas from Dr. Who, Mr. Rogers and Mario. The classroom is a collection of portals, a Tardis, or Mr. Roger’s Neighborhood Trolley 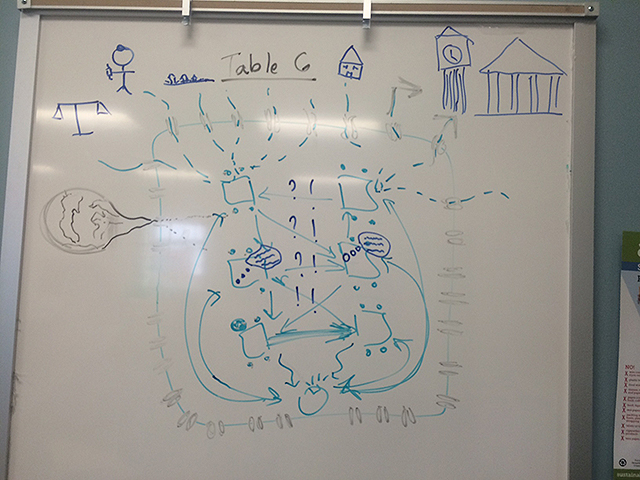 This class is built on cell metaphor from biology. I don’t remember the whole story, but it was detailed and well thought out. There appears to be a lot of activity inside, replication and transformation and growth. It’s wrapped in a semi-permeable membrane, and it’s pulling the world in, but it’s also feeding out to systems of higher education, in order to transform its environment. My favorite of the drawings. One person was pleased that they used a biological cell rather than “an actual cell,” referring to prison. I wondered what that said about our society, that an actual cell is viewed as jail, rather than the foundational building block of life on this planet. I mentioned that to the biology professor in the group and he told me of the etymology of the word, that the person who originally discovered the cell thought it looked like prison. 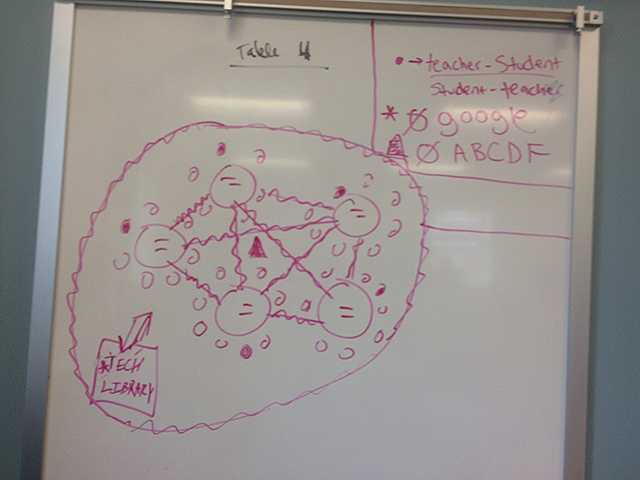 Here is another one that shows nodes on network as the class. the squiggly lines show that it’s flexible, changing, evolving. There’s no hierarchy – teachers as students, students as teachers, and they want to do away with grading. The pros and cons of that became a class discussion, with thoughtful points on both sides. Grading was brought up in the keynote as well – Tressie Macmillan Cottom said that shortly after the A-F grading scheme was invented in education, it was adopted by the meat packing industry, and that the grading of meat is far more detailed and nuanced than anything schools do. Does that mean we value carcasses more than students? Or is it because the complexity of human learning is so great that we use a reductive system of grading out of necessity?

This entry was posted in Uncategorized and tagged digital pedagogy lab, digped. Bookmark the permalink.