I hadn’t been paying attention to the #HumanMOOC, but it showed up in my Twitter feed so I took a look. George Siemens and Matt Crosslin recorded a Hangout last week on Customizable Pathways Design Research and Humanizing Online Courses (SLYT) which is worth a listen. A few quotes stood out to me:

We are on the cusp of a new period of human compassion and human creativity, art, culture…

Siemens is good at positivity. It’s one of the things I like about him. He’s not unbalanced about it though:

we enter, hopefully, either a period of incredible despair and despondency or we enter a period where we’re going to start to see an unprecedented flourishing of human creativity

He’s talking about technology and the Internet, and what we can do with it. We can put a lot of people out of work, which is a common vision. We could also try to make the world a better place. Some of those who embrace disruption might see that as cause and effect more than an either/or conflict. It makes me think of The Internet Course and ds106 as ways of thinking about what we have with the Internet and what we can do with it. I remember hearing futurist Glen Hiemstra say that it is important to imagine the future you want to see. Or as Alan Kay said, “The best way to predict the future is to invent it.” I think what matters in a world of abundant knowledge and information is what one can do with it, what one can make out of it – “creativity, art, culture…” It’s the human aspect that matters.

Letting technology and algorithms make decisions leads to some unexpected outcomes. I’ve been fascinated by machine translation and auto-captioning for some time now, ever since I found a copy of Bava’s Venus of Ille on Youtube. When I watched it there was a captioning function and a translation function, which together barely made it comprehensible, but it was amusing to see terms like iPhone and Facebook show up in a TV movie from 1979. So at one point in the Hangout Siemens expresses his opinion of Knewton’s mind-reading robo-tutor in the sky, and the captioning system interpreted robo as wrobel, which means “A level of drunkeness rarely seen in humans.” 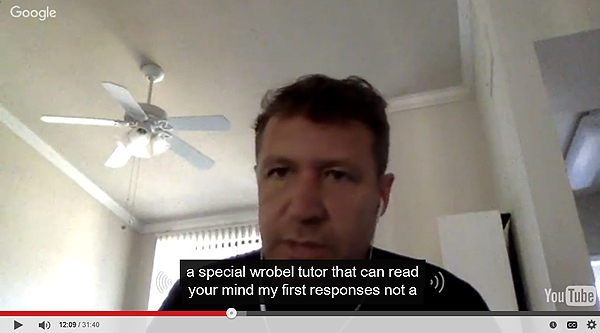 Here I wonder if the machine did read George’s mind. Or maybe it was wrobel status.

Perhaps my favorite part occurs near the end, when an off camera voice asks, “Are you talking to yourself?” I often feel like that, although in a more positive perspective I should see it as thinking out loud.

This entry was posted in Uncategorized and tagged humanmooc. Bookmark the permalink.

1 Response to O, the humanity