In this episode, Freamon repeats “what everyone knows and no one says” as Daniels put it 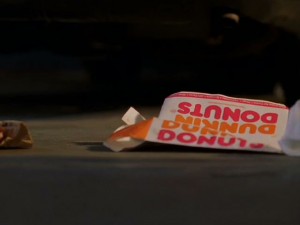 Herc and Carver followed the money out of the towers and confiscated it from Wee Bey’s vehicle. One of them made a joke about “dollars to donuts” in the squad room, which we’re reminded of when the Dunkin Donuts box comes out of the trunk at the end. 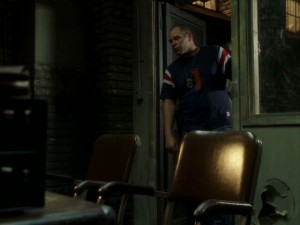 They were searching the trunk because they were suspected of pocketing some of the confiscated money. In this shot they’re being called into Daniels’ office, where they will be called out on it. The way the light reflects off of the chair emphasizes the idea that it’s the hot seat. 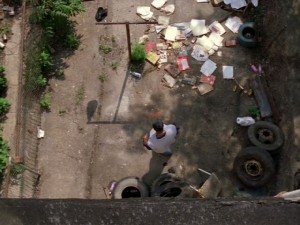 Here is a perspective shot, looking down from a roof to where a stash of drugs is kept. Does Bubs “see the bottom coming up at him,” as Waylon says? The shot plays a metaphorical role as well as a purely narative one, at the same time as it creates visual interest with the unusual angle.

It was kind of comical to see Bubs do his fishing trick, but things turned bad quick. While he gets away, he also gets to listen to an innocent bystander take the beating meant for him. Notice how the background noises affect the mood – not just the cussing and the blows from the bat, but also the siren and alarm, which really add a level of tension to it. 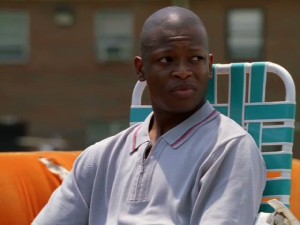 This shot of D’Angelo caught my eye. He’s not sitting on the couch anymore, but on a folding chair. Is this symbolic? The reason it caught my attention is the color contrast. The blue of the chair is basically the opposite of the orange of the couch. It’s subtle, but it seems to say D is not part of this; he doesn’t belong here. 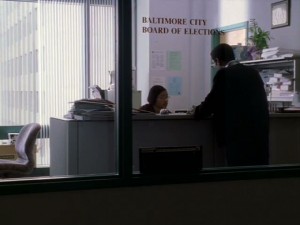 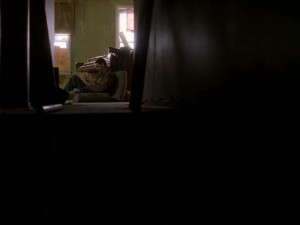 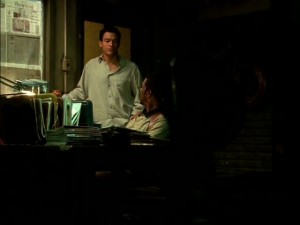 I mentioned the frame within a frame idea last time, and found some more examples here: Freamon at the Elections office, framed by the window, which conveniently tells us where he is. Johnny in whatever that place is, framed by the doorway, darkness crowding in. McNulty and Freamon, similarly framed by darkness, but there’s a difference here. The light comes in from the corner, which opens up the composition, as if they have a way out where Johnny was trapped. 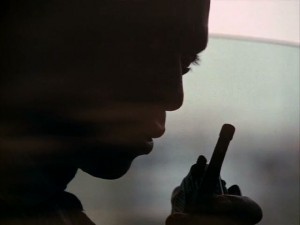 This last one I just like for the silhouette effect. We see little more than the outline, but it’s enough to tell us what it is. The whole series strives for a high level of realism, but at the same time maintains a strong artistic aesthetic.

1 Response to Notes on Episode 9