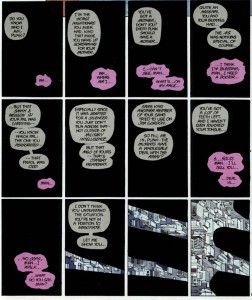 It was interesting that Thursday evening’s class drew a parallel between the Continental Op and Rorshach. That hadn’t occurred to me. I thought of a similarity to Batman in Frank Miller’s Dark Knight Returns. Batman is quoted as having said, “We’ve always been criminals. We have to be criminals.” On one hand, Batman and the Op are supposed to forces for good, on the other, they can play as dirty as the bad guys.

Some stories just give up on good guys altogether. In gangster movies like Miller’s Crossing or The Godfather, the “heroes” are nothing but criminals. And that leads back to our culture’s fascination with violence, which was also discussed in class. I’m familiar with Pinker’s thesis that human civilization is less violent than ever through his TED talk. While I can see his point, I’m not sure that I’m ready to agree with it. In contrast, it seems that American media culture is more violent than ever. Maybe we’re trying to achieve some kind of equilibrium, or maybe we’re appeasing the darker side of our nature with fantasies.

This entry was posted in Uncategorized and tagged hardboiled, redharvest. Bookmark the permalink.

1 Response to To be criminals