I have built simple websites and pages before, and even used my old PC as a server for a digital library project, but setting up a webserver and domain was new to me. I sorta know some of what was going on. The raptnrent domain name is a way of putting a comprehensible name on the numeric IP gibberish that really identifies the server. The Hover people needed to be pointed to the HostGator people for it to work out. I had a little trouble with that because a little step appeared to be missing from the instructions – I think I had to click on Settings or something before I found the link shown in the directions.

I still need to work on the WordPress site to make it look like something. That could potentially be fun. 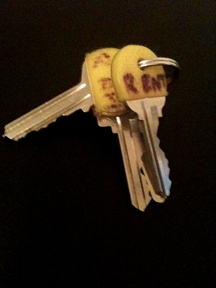 About the name: When I moved into this apartment, the landlord gave me four keys – one each for the front and back doors to the building, and to the front and back doors of the apartment. They labeled R APT and R ENT, F APT and F ENT. I thought if I were poetically inclined I might be able to make something of the juxtaposition of the words rapt and rent, like some kind of fascination with something torn. Adding a .us on the end would have been even better, suggesting something about watching the empire crumble, but apparently you can’t keep ownership of .us domains private. So it’s just me being torn. Or maybe it’s me keeping up with the bills. How boring is that?

This entry was posted in Uncategorized and tagged domo, ds106. Bookmark the permalink.