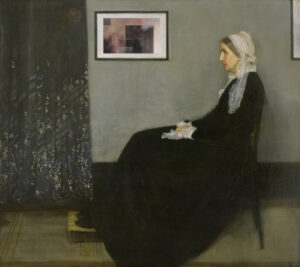 For today’s Daily Create we had to put ourselves in a famous painting. Part of my story is that I used to try to be an artist/painter, so I wanted to play with a “painting within a painting” idea. I’m not sure if there’s a name for that. There is something called the Droste Effect, but that’s really about recursion, which is not the same thing. I was thinking more along the lines of Norman Rockwell’s self-portrait. Whistler’s Mother is another example, so I went with that. With the help of the GIMP, I took a picture of one of my old paintings and dropped it in the frame on the wall. I wanted to make it look more like it belonged there, so I reduced the lightness and the saturation. I probably should have gone further, since the lower right corner is still too bright. I could even have tried to get some of the texture from the wall into it, but I’m still trying to figure out GIMP so I left it alone.