Your fly is down 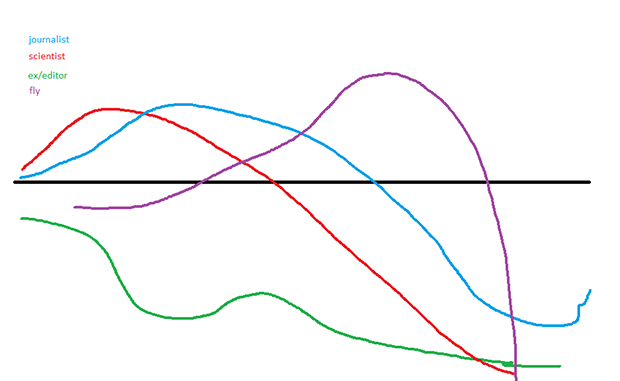 I thought I’d look at the 1986 version of The Fly and try a story shape analysis. Something that occurred to me when watching Vonnegut talk about the shapes of stories is that he’s talking about one character’s story. Cinderella’s story takes a different shape from that of the prince or the wicked stepmother.

The Fly makes a good example because there are basically only three characters of any consequence: the scientist, the journalist and the editor. I see all their stories as downhill slides. The editor starts off on the negative side because he’s been dumped by the journalist. He gets a boost when he thinks he can play the knight in shining armor and save the day, but then he gets crippled by the fly. So he starts down and it only gets worse. The journalist’s fortunes go up early as she finds a good story and a new relationship, but the relationship goes bad. You could say her story takes an upturn towards the end since she comes out alive. The scientist’s story follows a similar path, as he gets his experiments start to be successful and he finds himself in a new relationship. But he also is infected with the fly genome and loses himself to it. I suppose we could count the fly as a fourth character. If we don’t count its story as ending in the teleporter, then it goes up as its persona takes over the scientist, then takes a nosedive at the end. It’s a tragedy for all involved.

There is a lot of potential in looking at stories from the points of view of different characters – not exactly a Rashomon effect, but perhaps something analogous. What does the story of The Breakfast Club, for example, look like from the point of view of the janitor or the assistant principal? What is a significant event to the kids might be just another day to them, or a minor annoyance. But it shows that a story can have more than one shape, depending on your angle of view.

This entry was posted in Uncategorized and tagged ds106, ds106things, the fly. Bookmark the permalink.