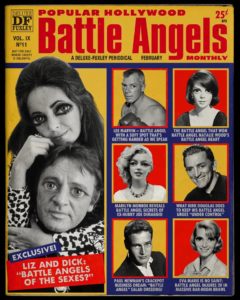 This morning a saw a new creation from one of my favorite contemporary artists, Cris Shapan. This is in response to advertising for an upcoming film, Alita: Battle Angel, which dares to venture into an uncanny valley. What I really like about Shapan’s work is the attention to detail, like that little blurb, “Not for sale where creepy is unlawful.”
But it got me to wondering if I could do something similarly creepy. It looks like a fairly simple bit of Photoshopping. I looked for images of James Bond and found a collage of the many actors in their role. It would have been great to work with, but the image was too small and the resolution was too low. Instead I grabbed several individual Bonds and put them together in my own collage. Then I used the polygon selection tool to copy the eyes, one pair at a time. I set the feathering to 2 px so that it would blend smoothly with the rest of the image. Then I enlarged the eye copies and moved them into place. I had to move the second eye separately to get them closer together, like in the original. I repeated that for each Bond.
The effect is interesting. The eyes are big enough so that they don’t look right, but not so much that it’s immediately obvious what’s wrong. I probably could have pushed it further, especially with Dalton and Bronson. Maybe I should have enlarged their eyes vertically.

OK, that’s creepy. So, I did this because I thought it would be fun. There wasn’t really a Visual Assignment that matched it, as far as I could tell, so I’m making a new one. I had to think of a title, and this just came to me: