From screen to page 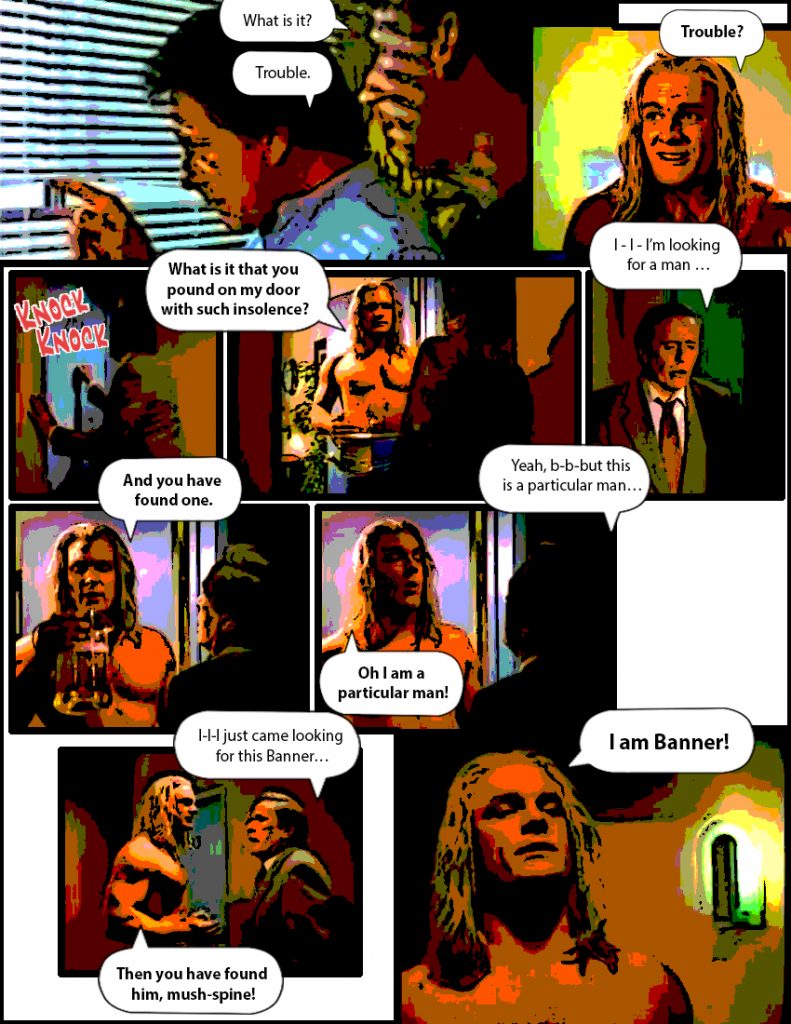 So I had this idea to use design to turn movie scenes into comic book pages. Not exactly reverse engineering storyboards, but rather using the language of sequential art, panels and layout, as part of the storytelling. This is challenging on a number of levels. The first is a matter of selection. How much can you get on a page? How can you edit it so that there is a beginning and an end, and an end which makes you want to turn the page, so to speak? What do you need to show, and what can you leave out? That goes for dialogue as well as visuals.

The language of sequential art is a challenge in itself, because most of us probably read it rarely if ever, and use it never. So we have no idea how to make an action scene move fast, or how to build tension visually and sequentially. Done well, this could be a true five-star assignment. Or someone could be lame and just arrange six screenshots uniformly in two columns and three rows, without even trying to work with the internal dynamics among the images. That might be worth two stars, if edited effectively.

I took this scene from the 80s TV movie, The Incredible Hulk Returns, because I thought it was funny. Unfortunately the humor is tied up in what comes before and after, as Thor reacts and adapts to the 20th century, so it mostly gets lost. Nevertheless, it makes for a dramatic moment that can stand by itself as a page.

I used a Firefox plugin to grab the video, and used MPEG Streamclip to pull frames from it. I eliminated a lot of dialogue, particularly from the investigative reporter. The essence of the scene is Thor intimidating the reporter, who has been tracking Dr. Banner/The Hulk for an entire series before this movie, into going away. Thor claiming to be Banner makes a good end point, because there has to be a reaction, so it would lead to the next page. But again, that gets lost without the context of what came before.

I made a Photoshop image 850 x 1100 pixels, to get normal page proportions, and copied and pasted my screen grabs into it. I found some speech balloons online, and used one of them to contain the conversation fragments that I wanted to use. I had to do some fiddling with the size and placement, and really should do some more so that it flows properly. I made Thor’s speech in bold type, to suggest his dominance in the scene. I could have used color or different typefaces to add further character to the voices, but hindsight is 20/20.

I made duplicates of all the images and merged them (that’s Ctrl-E, for those who like shortcuts) onto one layer, which I then ran through the High-Pass filter and then used the Threshold image adjustment. that made it into a black and white outline image layer. On the layer below it, I boosted the saturation and used the Posterize image adjustment, and then set the blending mode on the outline layer to Darken. The idea was to make it look like illustration more than photography, so it might look more like a comic. I need to work on that technique to make it more effective. Maybe it would have been better to leave the images as they were.

Duplicating the images was important because it left me free to experiment on them without permanently ruining anything. Merging them onto a single layer allowed me to apply effects uniformly to all the shots, and to do them all at once.

This entry was posted in Uncategorized and tagged ds106, super106. Bookmark the permalink.