I’ve been playing with Adobe After Effects lately. I had a kinetic typography idea that I never finished, so I started looking into animation tools. But then I got sidetracked with the idea of making something sort of 3D out of a 2D image. I was thinking of a different kind of take on the animated comic book cover assignment. What you can do is separate parts of an image into layers, then arrange those layers in space, and then move a virtual camera over the image. Moving the camera alters the perspective on the different layers, giving it a pseudo-dimensionality. 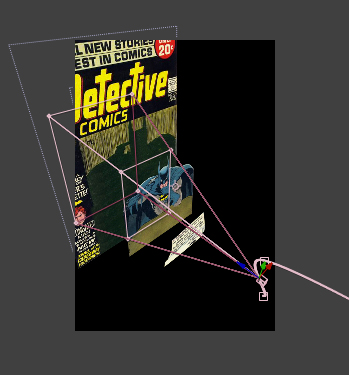 This is a bit time-consuming. As with the animated comic book covers, you have to fill in the background behind the layers, which can be a challenge. If we consider this image, the background behind Batman is mostly a shadow, so it’s tedious but not complicated to fill it in – you can use the clone stamp tool, or copy and paste parts of the visible shadow area. There’s also a content-aware fill function that sometimes works. All of this work is done in Photoshop, before going into After Effects. Where it gets to be a challenge is the area behind the note. Most of it is tabletop, which is easy, but part of it is Batman’s forearm, which might be easy for an artist, but it’s hard for the rest of us. Fortunately it doesn’t have to be perfect, because only part of it will be visible, and only for a short while, depending on how we move the camera around.

Once we have the Photoshop work done, we can import the image into After Effects. After Effects, I’ve found, has a lot of different tools, each with a lot of different settings and variables. This makes following any of the tutorials difficult, because they all assume quite a bit a prior knowledge on the part of the viewer. Like how I mentioned clone stamp and content-aware above, without saying how to find or use the tools and functions. I looked a a bunch of them, and found them all pretty annoying, but picked up clues along the way. There was one on Lynda which helped a bit: Motion Control 3D: Bringing Your Photos to Life in Three Dimensions with After Effects and Photoshop CS6. I also did a lot of trial and error, which I’m still working on. Basically, you import the Photoshop file into After Effects as a composition, move the layers to the stage area, make the layers 3D with that little cube icon, space the layers out (you have to resize them to compensate for perspective), then create a camera (Layer-New-Camera) and move it around on the timeline. Each of those steps was a learning experience for me, and I still don’t know what I’m doing. I managed to make something out if it though.

Detective Comics #426 cover by Michael Kaluta, via Diversions of the Groovy Kind.

This entry was posted in Uncategorized and tagged aftereffects, batman, ds106. Bookmark the permalink.

3 Responses to After Effects roulette