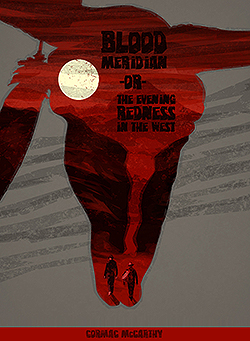 Based on Jim’s recommendations, I thought I should read Blood Meridian. Since my time is limited, I picked up the audiobook version so I could listen on my commute. It’s not the best way to do any book, due to the divided attention, but it’s especially problematic with Blood Meridian because the narrator takes away some of the ambiguity of the text, and adds his own interpretation.

But it did make me think it could be an interesting audio experiment. Could I make an audio piece out of quotes and commentary? It seemed worth a try. I scheduled a Google Hangout with Jim, figuring I would record it, intercut sections from the audiobook and layer in some music or background sound and construct some sort of hopefully coherent narrative out of it. Simple, right? Not exactly. One of the benefits of working in a group is that people can cover each others’ blind spots. I had an idea, but I didn’t have a plan, and that made everything a lot more difficult and time consuming than it needed to be.

Pulling quotes was a challenge. While the Audible app on my phone breaks the book into chapters, on my laptop it has to play through iTunes, where it’s just one thirteen hour recording. Luckily, I found the someone had ripped sections of it to Youtube, so I downloaded those and divided them up into about a dozen files. I thought of some music that I might use for interludes. There is a copyright problem with that, but then there are copyright problem with the whole idea. I justify it as a non-commercial learning experience. Some might call that rationalizing, but I think the Judge gives us permission to do as we will.

We did our recording, which ran about 90 minutes. Jim had a lot of great insights, and he articulates them far better than I do. I had some sketchy ideas, but they were half baked and uncertain. I should have planned that better, but 90 minutes gives ample material to work with. With a bit of editing, I brought it down to about 40 minutes:

I should give it a second round of editing, if I find the time. Maybe I can tighten it up and make it sound like a real discussion program.

The pieces of incidental music I used were:
Going Out West by Tom Waits
Too Much Blood by the Rolling Stones
Behind the Wall of Sleep by Black Sabbath
War Pigs by Black Sabbath
Here Comes the Judge by Pigmeat Markham
A short sample of each piece leads into each quote from the audiobook, and each has some sort of meaning related to the quote or the book. That meaning may only be meaningful to me, however. I also used Western Jamboree by Watkins and the Rapiers as a theme song because I liked the “clarified the finer points” line. I don’t know if we do a good job of clarifying Blood Meridian, so call it aspirational.

Fail to plan, plan to fail, as the saying goes. It’s hardly a failure, and it was certainly a learning experience, but it would have been much more efficient if I had a plan from the start.

This entry was posted in Uncategorized and tagged blood meridian, ds106, western106. Bookmark the permalink.