I’m glad that people appreciate The Vignelli Canon. It was written for people with a design background, but it works for those who claim to have little:

the little booklet offered great insight to graphic design, with me someone who knows little about.

as well as those who don’t think about it:

pointed out many things that I have never really thought of when it came to design.

and it functions as an example of design:

In previous classes, people have come out against Vignelli’s criticism of the 8 ½ x 11 paper size. I think his point is valid. Using the Golden Ratio as a basis for the design of paper creates a natural harmony among printed works, whereas mismatched and haphazard design creates clutter and chaos. Unfortunately, in the tension between economics and aesthetics, economics tends to win. 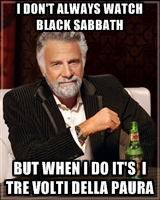 That happened with paper sizes, and it happened with Black Sabbath as well. Bava had structured the film in a particular way, so that the stories connected and flowed and built upon each other to a proper climax. I covered this ground before, during our Bavafest. But while the integrity of Bava’s designs was violated on multiple levels, some of it remains, particularly the set and lighting design. Comparing the two versions highlights the idea of “design is one” that people picked up from Vignelli. The whole film was designed so that everything worked together to achieve a certain vision, and the re-editing fractured that in a way, and made it less than it was.