For our third listen-along session this week, we heard the Lux Radio Theater production of Alfred Hitchcock’s Notorious. This was a little different from our earlier shows. Except for Moon Grafitti, all the others originated in written literature, although The Butterfly was the only one that didn’t adapt a film production.

This was problematic because the visual language of film doesn’t translate so well to the language of radio. I didn’t notice it so much because I’ve seen the movie often enough to know it thoroughly and to picture what was going on. Some of the listeners, on the other hand, would get the male leads confused because they had only voices to go by.

The worst part was the ending, which completely fell flat. Some people wondered what happened and some didn’t seem aware that it had ended. As Talky Tina noted, the ending of the film is very dramatic:

but the drama is all in the visual – the lighting, the framing, the editing and the pacing, the expressions – none of which came through on the radio. 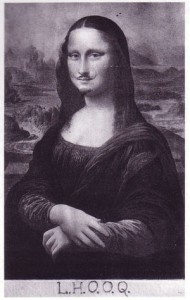 I guess the production was doomed from the start. To make it work, they would have had to do a drastic rewrite of the ending, an act which would have gone over about as well as a moustache on the Mona Lisa.

The participants for the evening were:

This entry was posted in Uncategorized and tagged ds106, noir106, notorious. Bookmark the permalink.