TV on the radio

One of the illustrious ds106 internauts came up with the idea of live tweeting an episode of The Wire. A very cool idea, especially for an online class, because it helps create a sense of community. So for Intro to Audio week, we’re playing episodes on ds106radio and live tweeting as we listen. It’s an interesting way to experience the show. So much of it is visual, and so much of the acting is in the eyes and expressions. All of that gets lost on the radio, but we get to focus purely on the sounds, and see (hear) just how much is going on in the audio track, and how much of the story it tells. Someone pointed out all the oldies in the soundtrack. That reminded me of the opening epigraph for the season, “Ain’t never gonna be what it was.” The nature of labor and its place in society has changed. In some of the characters, Frank Sobotka especially, I see a longing for the way things used to be. The oldies reinforce that. The epigraph has a certain fatalism to it though. 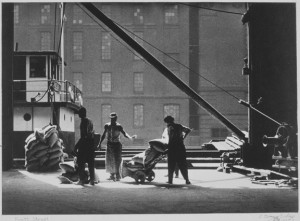 Maggie Stough’s brilliant analysis of episode 4 ended with a photograph that seemed to have some significance. I was curious about it too, but didn’t think to look into it until she brought it up. Now, how do find out about a picture when it doesn’t have any information attached? I ran the URL of Maggie’s image through Google Image Search and found an article about the photographer, A. Aubrey Bodine. The picture is of men unloading a ship on Pratt Street in 1935 – Baltimore dockworkers from days gone by.

Getting back to audio, several of our wire106ers talked about the revelations regarding the complexity and impact of sound that they got from the Jen Ralston interview. I hope people take to audio, because we’ve been given the keys to the Tu/W/Th 9pm slot on ds106radio. It’s there for us to use, so let’s take advantage of it.

This entry was posted in Uncategorized and tagged ds106, ds106radio, wire 106. Bookmark the permalink.

1 Response to TV on the radio