This bird has flown

Episode 10 starts out with Bubs, apparently clean for the first time in a long time, sitting on a park bench enjoying the day. We hear sounds – the breeze through the trees, children playing, birds chirping – sounds of aspects of life that had probably escaped his attention while he was an addict. Compare that to the sounds when he’s on the street at night – constant sirens, traffic, trafficking (“Death Row! Death Row here!”) and this dull roar underneath everything, like a storm could be coming. He feels his demons calling him, in a walking nightmare.

@phb256 & @jimgroom… Just watched the part in #TheWire where Wallace asks what the crickets were. Powerful stuff. #ds106

Lauren picked up on the crickets, another sound I wanted to bring up.

The scene says something about the differences in the lives people lead, which I think is what Lauren picked up on, but it’s also fascinating from a telling story with sound standpoint. You hear the crunch of the gravel under the tires, the motor, the parking brake, the doors opening and closing – you know what’s going on just by listening to it. And the crickets. I left a little bit of the following scene in there so you can hear the contrast. 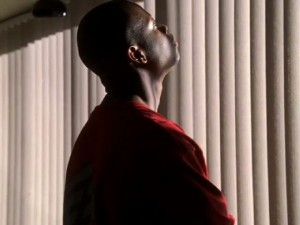 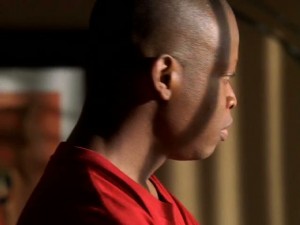 There’s some nice symbolism in the imagery too. In the scene where D’Angelo is listening to Donette’s shopping demands, we see him staring at vertical blinds, like a prisoner behind bars. The shadows they make amplify the effect. This is something that’s common in film noir – shadows suggesting bars to show that a character feels trapped. And that’s what D is feeling. I like that sonic transition to the next scene. Donnete’s yelling answered by the voice on the wiretap, “Why you holler at me? I’ll get to you when I get to you.” We hear what D wants to say, although it comes from someone else in a different context. 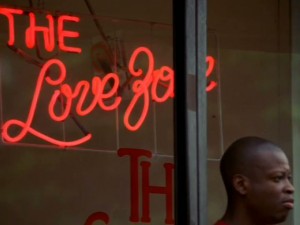 Later we see D waiting to catch Shardeen outside Orlando’s, standing under neon letters hyping The Love Zone. But she’s done with him, and as she turns her back and goes in the club, a bird flies in and out of the shot. Like the song says, this bird has flown.

3 Responses to This bird has flown