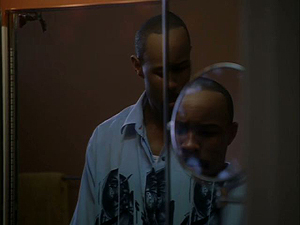 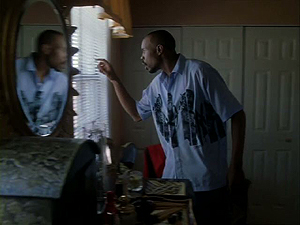 I wrote a little about the use of mirrors last time around. We see some more in episode 5. The opening scene shows Avon Barksdale in the apartment of one of his girlfriends. We see him and his reflection divided among three mirror panes. Later in the scene he is peering through the blinds to check the street outside, and we see his reflection in another mirror. The message here is that he’s always watching himself. That circumspect caution is what kept him safe from rivals and law enforcement as he built up his business. That message is explicit in the dialogue and implicit in the mirrors. 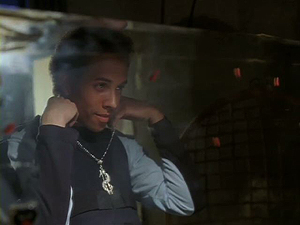 Later on there’s a shot of Brandon looking in the mirror as he tries on a necklace picked up in a robbery. In the image, he appears to be looking into darkness rather than at himself. This could be interpreted as a subtle foreshadowing. 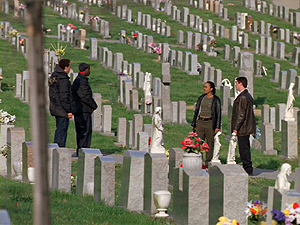 This shot shows a wide angle view of the meeting between the cops and robbers. The cemetery setting is a not-very-subtle reference to the amount of death the show deals with. Notice how the statues are all looking away from from the meet, turning a blind eye to what’s going on. 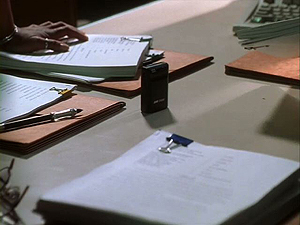 Here’s a shot of the namesake of the show – the wire. The squad has gone through all the effort to get legal permission to run a wiretap on D’Angelo’s pager, then they set it down and stare at it intently, waiting for it to buzz. It’s another bit of foreshadowing – they’re job is mostly watching and waiting. 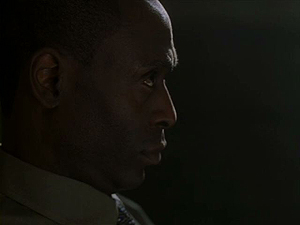 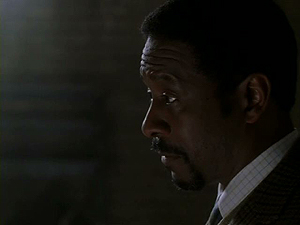 These two shots come from a discussion between Freamon and Daniels. I love the dramatic lighting, of course, but the composition also tells the story. Even though each image only shows one character, the way they’re facing indicates conversation. It’s an obvious thing, but I thought I’d highlight it anyway. 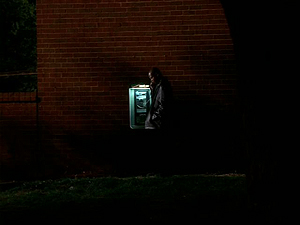 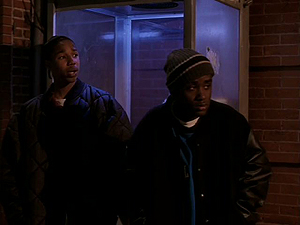 I like these two phonebox shots – that glowing, and the color contrast – showing the phones’ importance in the storyline. 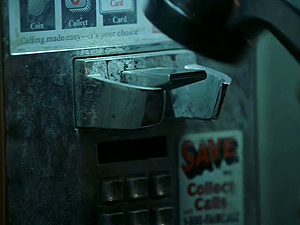 Then there’s this last one, at the closing scene. Look at all the grimy detail. There’s a message on the phone too: “it’s your choice.” The kids involved in the phone conversations know what the outcome will be, but with Poot and Wallace it’s more of an abstract thing, I think. D’Angelo knows what it is, having had some first-hand experience, and we see the weight and seriousness of it in his body language. Maybe we’d like to think they have a choice in the matter, but being in the game, as pawns no less, do they really? If D’Angelo didn’t pass along the word that Brandon had been spotted, there would have been repercussions.

The Farmer in the Dell

This episode features the scene George Veletsianos tweeted about a while ago. Peter Honig wrote a brilliant meditation on this scene a couple years ago, so there’s not much I can add. That enigmatic whistling reminds me of Ennio Morricone and some of his spaghetti western scores. Omar, the whistler, is essentially a cowboy character, although I ddin’t actually recognize that until it came up in one of the commentaries. The tune is “The Farmer in the Dell.” We know this because he says the closing line, “the cheese stands alone.” The line, and the tune, are open to some interpretation. The melody is the same as “A-Hunting We Will Go“, which fits Omar’s character well. It also fits the futility of the Game on the police end:

This has happened a few times already in the series, and it will again. “A-Hunting We Will Go” comes from The Beggar’s Opera, and 18th century drama which, to quote Wikipedia, “satirised politics, poverty and injustice, focusing on the theme of corruption at all levels of society.” Another fascinating parallel.

7 Responses to Reflections on episode 5