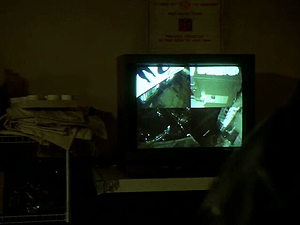 We’ve seen several shots of surveillance so far. Here’s one of the monitor in the office in Orlando’s. It’s only visible for a few frames as D’Angelo walks by, but it caught my attention as an example of surveillance by the surveilled. I suppose the kids doing lookout and yelling “5-0!” are another. 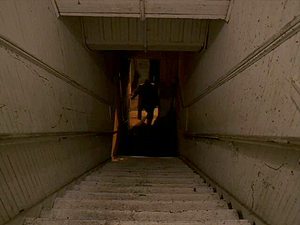 Staircases are a visual metaphor that shows up throughout the series. Going up or down signifies things, like when the squad was sent down to the basement. Here Freamon is about to go up the stairs to a boxing gym. It’s the moment where he goes back to doing real police work, moving up from paper-shuffling. 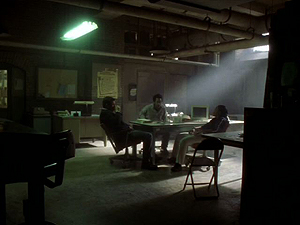 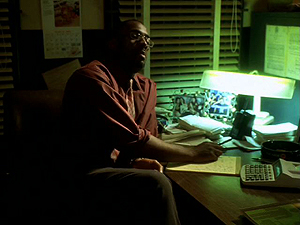 There are numerous examples of subtle color use in the episodes so far. Similar colors show up from scene to scene, which creates a kind of visual harmony. The green cast from the overhead light in the squad room is mirrored by the light on Stringer’s desk. 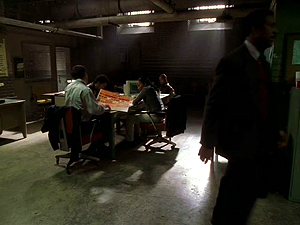 Color is used for contrast as well. The orange of the poster with Barksdale’s picture stands out against the greenish-blue tint of the rest of the shot. 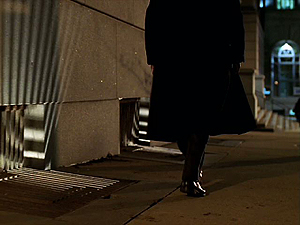 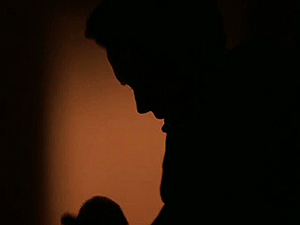 I love the line patterns made by the light coming through the bars in this shot. It’s not a scene of any particular significance, but it ups the aesthetic ante. The silhouette shot from the robbery scenes does as well.

The backlighting effect in the argument between Daniels and McNulty has a nice melodrama to it – very visually striking. 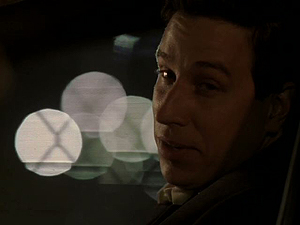 Here is an example of the shallow focus effect that we sometimes see in night time scenes. The face in close-up is in focus, and the background is blurred to the point where all we see are abstract circles.

I’m interested in the way sounds tell the story too. The background noise, although it’s sometimes hard to hear without headphones, adds character and atmosphere. In the robbery scene we can hear praise singing from a nearby church. You can hear it in the background in the outdoor shot, but if you listen closely it’s present, though muffled, throughout. It suggests that there are other sides to life in the hood, that there’s more than just the Game.

There’s a scene in the squad room where you can hear some jazzy music coming from a radio. To me at least, it creates a kind of noir atmosphere. Listen to the sound of the door closing – it’s like a jail cell door slamming shut.

This is a scene on the street, as Freamon gets out of his car and walks across the sidewalk to the door to the gym. Listen to all the activity on the street. Except for the one person who accosts the detective, it’s not shown in pictures, just sounds.

This entry was posted in Uncategorized and tagged ds106, wire106, wire160. Bookmark the permalink.

3 Responses to Episode 3 sights and sounds