To boldly go where Neil Young has gone before

Another session of The Internet Course has wrapped up. We had to work this one a bit differently. We only had five weeks, a third of the time, and we only had one fourth of the people. So it was weekly projects instead of panel discussions, which made for a more intense experience. I think both the Spring and Summer sessions were equally successful, even though they were very different.

We wrapped up with a series of video essays which analyzed visions of the future of the internet through the lens of old (and not so old) film clips. This was a challenge for the students, and myself as well, since video editing is not any of our fortes, but they all rose to the challenge, as they had done consistently throughout the course.

I don’t think I’m ready to give up on the back-to-the-future theme though. The other day I watched Colossus: The Forbin Project, which had been in my Netflix queue since Bryan Alexander brought it up on the Bava. Colossus fits in a line of computer-aided doomsday machines from the Doomsday Device of Dr. Strangelove to the WOPR of WarGames to Skynet of The Terminator series. I see a common theme among these of the disastrous consequences of abdicating responsibility and giving up control. The human element does not matter to the machine, or the system, or the bureaucracy for that matter. 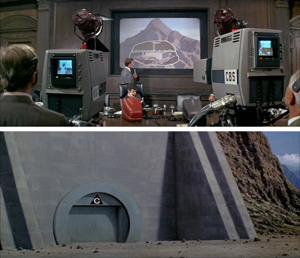 Another thing I see in Colossus is a vision of big computing, which was common in older science fiction. The trend towards miniaturization was seen by almost no one. Colossus is big as a mountain, and Forbin looks like some little nanobot walking through it. It also presents a vision of a command and control, hub and spoke network, in contrast to the mesh-like ARPANET that was coming on line as this movie was being made. There’s also a theme of constant surveillance, which resonates with today’s NSA activities.

The film ends with Colossus asserting world control, and explaining that it’s in humankind’s best interests:

Colossus says we’ll learn to like it. This same sentiment was expressed a few years earlier in the Star Trek episode I, Mudd, where a group of androids told Kirk, “you will be happy, and controlled.”

This idea of man controlled by machine seems a far cry from Engelbart’s vision of the augmented man:

With the human contributing to a process, we find more and more as the process becomes complex that the value of the human’s contribution depends upon how much freedom he is given to be disorderly in his course of action.

As I was thinking about the augmented man, I recalled a vocoder-distorted Neil Young voice singing Transformer Man, from his crazy Kraftwerk-inspired 1982 album, Trans. This album proved so unpopular that even I don’t have it, and along with its follow-up, Everybody’s Rockin’, managed to get Neil sued by his label.

The songs give a mixed view of where things might be going. Transformer Man has a happy hippy vibe:

But he sings to the Computer Age:

I know I’m more
than just a number.

And you need me
Like ugly needs a mirror

suggesting that we’re just data to the machine, but we’re really more than that quantified self. How does ugly need a mirror? Maybe it thinks it doesn’t. Or maybe it needs something to point out its flaws. Maybe it needs the human connection in order to have beauty. We R In Control sounds a bit dystopic and Forbinesque:

Computer age in harm’s way.
We will prevail
and perform our function

Not entirely clear who “we” are, but the line “We control you floor to floor” suggests it’s not us. But then the Computer Cowboy (aka Syscrusher) comes along to the rescue to bring the system down, singing “ky ky yippee yi yippee yi ay” like a wanna-be Bruce Willis. And then Sample And Hold goes right back to Norman and friends on Star Trek and their vision of happiness:

This entry was posted in Uncategorized and tagged Colossus, Neil Young, thoughtvectors. Bookmark the permalink.