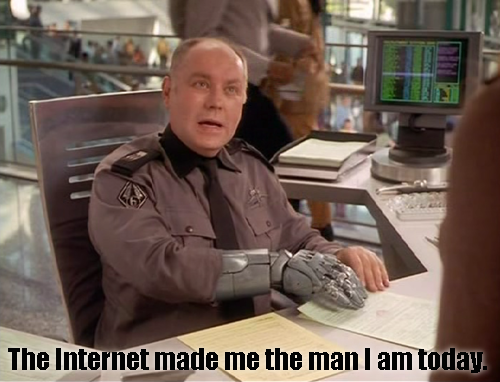 I used to work in printing. The internet had some impact on the way we did things at my company, but nothing major. When we were being bought out by one of our competitors, I started working on an advanced degree in digital printing and publishing. What I learned there about the internet’s impact on the industry led to my career change, so now I’m a librarian. And better off for it, I think.

About twelve years ago or so I set foot into the world of online dating and found my wife. I guess we were both looking to meet people outside of our usual circles, and the internet made that possible. Marrying her was the best thing I’ve ever done. I think those are two pretty significant impacts. You could say the Internet made me what I am today.

This entry was posted in Uncategorized and tagged impact, tic104. Bookmark the permalink.