I grew up watch Dragnet reruns, so when I read “The Black Dahlia” I couldn’t help but hear Jack Webb’s voice and his distinctive cadence in my head. Here’s a video of him clowning around with Johnny Carson:

He sounded the same when he was serious, except people didn’t laugh on the set. His show would always start out saying, “The story you are about to see is true. Only the names have been changed to protect the innocent.” Of course, more than the names were changed, but I wouldn’t be surprised if the essence of the stories came from police files and news reports. 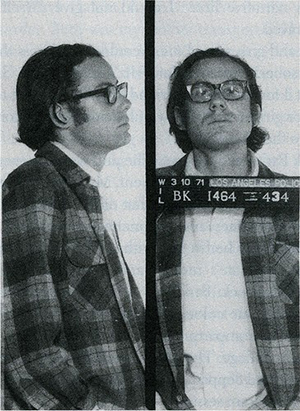 The Black Dahlia is a true story so gruesome it sounds like it should be fiction. Even that police sergeant’s name: Finis, as in “the end.” A fiction writer would be jeered for giving a homicide investigator a name like that.

Ellroy wrote a Dahlia story of his own, which was similar to Torso in that he invented two detectives and a resolution to the crime. Something about Ellroy’s writing style reminds me of the ping-pong dialogue in Dragnet. Those clipped sentences and short paragraphs, sometimes only two sentences, or even one, sound almost like they could be Joe Friday, except Joe kept it clean. Ellroy’s not so concerned with decorum and respectability.

This entry was posted in Uncategorized and tagged dragnet, ellroy, true crime. Bookmark the permalink.