Bendis tells the Torso story in a very cinematic fashion. The dramatic lighting and the camera angles all look like something out of film noir. Then there’s that repetition from panel to panel, sometimes with slight variations, that gives it a filmstrip feel. At the same time, each section opens and closes with a fade in/fade out, zoom lens effect, but the transition isn’t from image to blur but rather image to halftone dot. In one way this reminds me of the Pop Art of Roy Lichtenstein, probably because I’ve studied art history, but the intention is probably to tie the story to newspapers, which are becoming a thing of the past, at least in printed form. Bendis also incorporates photos from news archives in the illustration, in a very deft manner. It’s sort of reminiscent of Cold Case, although the graphic novel predates the TV show. There was a grubbiness to newsprint and ink. It would smear easily and get on your fingers and make you feel dirty. Bendis recognizes this in an interview: “Crime stories should be dirty and seedy and there is nothing dirtier and seedier than rubbing ink on the page.”

Another atmospheric element Bendis brings into the design is the spiraling pattern of the panels on some of the pages. Maybe this is to show that things are spiraling out of control, or spiraling down the drain. It pulls control away from the reader, in that one has to turn the book to read it properly. It’s a little heavy handed and a little annoying, but I like the experimentation anyway. 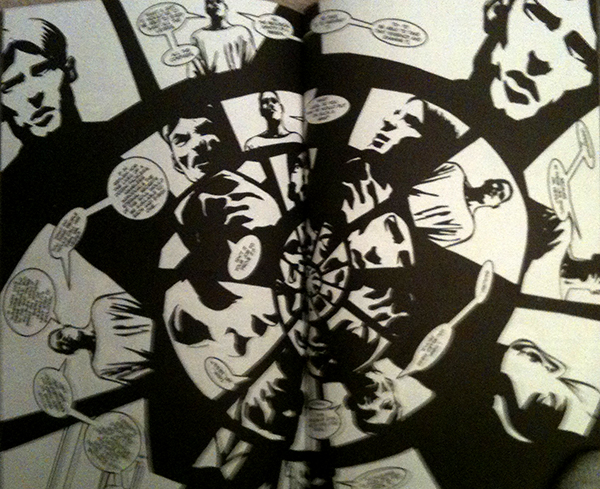