When we were kids my brothers and I were doing something annoying, I don’t remember what, but it prompted my aunt to call us bastards. Of course, we thought that was the funniest thing ever, and never passed up a chance to recount the story in her presence over the decades that followed.

So in looking into the background on Poor Naomi, it appears that she had a history of jacking up her baby daddies for child support funds, which at that time in North Carolina were called bastardy bonds. The bonds were not so much to support the child as to insure the county against having to do so. And if a woman did not identify the father or post the bond herself, she was subject to imprisonment. 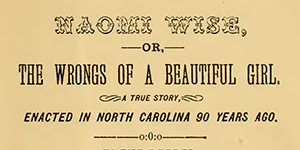 There is a poetic account of her life that supports this view, which differs from the song. Yet this is contradicted by another source. Perhaps one version comes from the killer’s people and the other from the victim’s family. I’m not sure that anyone knows the true provenance of either. Ballads and stories tend to change as they pass from one teller to another. Bob Dylan had his own take on “Naomi Wise“:

The Randolph County historian pieced together a lot of this from various primary source documents. It’s fascinating to look at these stories, supposedly true, and find so many contradictions. What is the truth, and why is it so changeable?