The things that show up in in the feed reader

In addition to Foucault’s torture, we’re also looking at Levi Ames’ tale this week. Or should I say – one of Levi Ames’ tales. The notes on the Ames reading say that there were 19 different accounts of his story published. That suggests that a lot of people were buying it and a lot of publishers were trying to cash in. The introduction to Pillars of Salt gives some context and discusses some of the reasons for and consequences of executing someone for petty thievery. And while he’s called a penitent thief, his dying words are “lock your doors and windows,” which is rather weak penitence, especially in comparison to Esther Rodgers’ speech. It feels to me like Ames was going through the motions, but not really feeling it.

So it was a fortuitous coincidence that I should click on Feedly this morning and find this post from Sutpen’s blog. For a kid who’s just been arrested, he doesn’t look too penitent either. 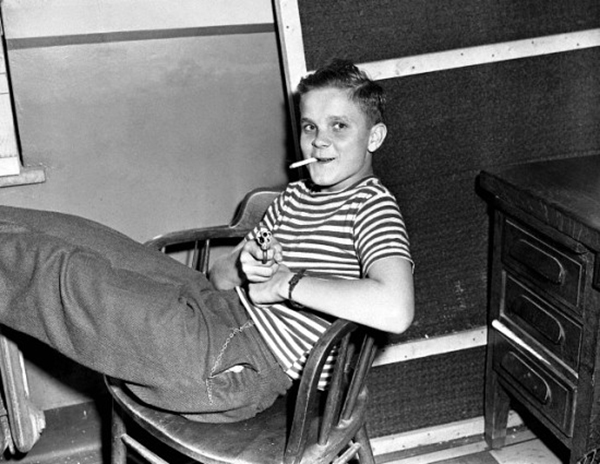 Original Caption:
Newark — Assuming a typical “movie hard boiled” pose, after he was apprehended following a hold up, is Robert (Baby Face) Naschik, 16, who admits to 30 robberies and burglaries. The youthful desperado caught from descriptions given to police by patrons of a bar and grill which he had victimized, says that he escaped from a New Jersey State Reformatory on July 5th. (1943)

This entry was posted in Uncategorized and tagged true crime. Bookmark the permalink.