Twitch of the Death Nerve band logo from Encyclopedia Metallum

I had never seen Twitch of the Death Nerve before. I guess I just figured I had outgrown Friday the 13th type movies, so I never put it in my Netflix queue.

After the opening credits, we hear a fly buzzing around. The camera tries to follow it, then it dies and plummets into the water, leaving only a ripple. This is reminiscent of “The Drop of Water” from Bava’s earlier film, Black Sabbath. There, the fly represented the nurse’s guilty conscience, something that was bothering her that she couldn’t easily get away from. Here it foreshadows people dropping like flies, but maybe it also suggests a deficit of conscience on the part of many of the characters. 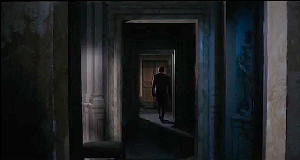 We’ve seen Bava use this framing technique before.

I watched Bay of Blood (one of the many alternate titles for Twitch of the Death Nerve) on Netflix streaming, then acquired the DVD through interlibrary loan. (I asked my wife if she wanted to watch “grisly death with color commentary” and she agreed. She rules.) Lucas’ commentary helps quite a bit. On the first run through, the movie seemed like a string of killings with a few scenes of dialogue tacked on to make a story. Characters sometimes die before they are identified or explained, then flashbacks occur much later to make sense of things. Lucas tells about the characters as they appear, so the viewer isn’t left wondering what the killing was about or whodunit. 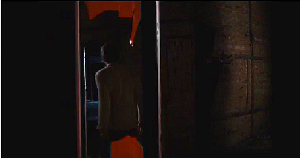 The DVD was also a better print. It’s kind of amazing just how much this means to the experience of the film. Bava does his own camerawork in this film. There is a quality to the photography that’s subtly different from what we’ve seen in his post-Ubaldo era. His Bava-colors are still there, but much less insistent as he goes for a look that’s more realistic than otherworldly. There are some nice blasts of color in certain scenes – yellows that recall the gialli and reds like in Blood and Black Lace.

The DVD also comes with radio ads for the movie. I can’t recall ever hearing a radio commercial for a film before.

This entry was posted in Uncategorized and tagged mariobava, twitchofthedeathnerve. Bookmark the permalink.