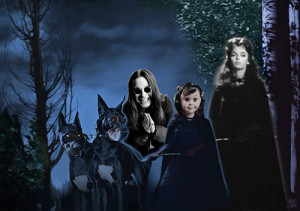 A while back I was looking through Youtube to see if anyone had done a fan video mash up of Mario Bava’s Black Sabbath and Black Sabbath’s Black Sabbath from the Black Sabbath album. I couldn’t find one – maybe it’s too obvious. Then I listened to David Kernohan’s FOTA Radio show, where he mixed dialogue from Twilight Zone and other sources with his drugged-out hippie dance music. I thought I’d take dialogue from Bava’s Black Sunday and mix it in with Black Sabbath to make it a kind of Asa/Ozzy duet. I guess it’s sorta like some audio assignments, Dialogue Mashup, Music Mashup, or Forced Collabo. Maybe. I thought of doing others and making it a Radio Bava show, but that might be taking it too far.

It was pretty easy to do. I used the Audacity/Soundflower trick to gat audio from the Netflix stream, and used Easy Youtube downloader plugin for Firefox to get the music. The song has long instrumental parts where I could dub in dialogue from the film. I had to amplify the dialogue quite a bit so it didn’t get drowned out, and I probably overdid it. To bring up the dialogue, I highlighted short bursts of it and used the Effects-Amplify function. I had to do it segment by segment because some parts were loud to the point where they would get clipped if amplified further. That was the tricky part.